The cartoon jihad, Iran’s nuclear plans, and a note on Latin America
Amir Taheri writes on Salafism and how it’s hijacking Islam

Ponder that while reading this: ARAB BIZ MAY RUN NYC PORT

The city’s ports, considered a major target of terrorists, are about to be taken over by a firm based in the United Arab Emirates, a country with financial links to the Sept. 11 hijackers.

Beneath the Rage in the Mideast lies the ages-old diversion: an emotion-charged conflict with a foreign adversary:

It is difficult to draw an absolute link between the ferry disaster and the violence that exploded across much of the Muslim world last week in response to Danish cartoons that had lampooned the Prophet Muhammad. Many Muslims feel it was blasphemous to draw the Prophet at all, let alone in a mocking manner.

But in the coincidence of the two events, there is a clue to a dynamic that has played out in this region for many years: Leaders often call attention to external enemies — most often the Israelis — as a device to allow their own subjects to blow off steam. The anger itself is almost always home grown.

Put simply, what we have witnessed isn’t the proverbial rage of the Arab street. It’s an orchestrated effort by illiberal regimes, colluding with fundamentalist clerics, to conjure the illusion of Muslim rage for their own political purposes. The Iranian mullahs seek to discredit Denmark as it assumes the rotating presidency of the U.N. Security Council, where Iran’s nuclear program is being discussed. The secular Allawite regime in Syria wants to shore up its ties with the Sunni religious establishment, especially now that Bashar Assad’s former vice president has declared a government in exile. The Saudis want to put behind them the latest stampede at the annual Hajj, where some 350 pilgrims were killed.

And in Europe, clerics and self-styled “community leaders” with close links to the Saudi government or the Brotherhood want to assert their dominance over populations that have yet to find their social or economic place in the mainstream of European life, as November’s riots in France showed. The fact that European governments seem easily cowed by threats of violence has only made the problem worse.

In all the uproar, we find it telling that the two places where Muslim communities have shown restraint and moderation is in the United States and Iraq. American Muslims are overwhelmingly middle class, upwardly mobile and not very susceptible to the atavistic urgings of distant dictatorships. In Iraq, an unsilent majority has repeatedly made its views plain about the religious fanatics who demand to speak in their name. Just imagine the kind of anti-Western protests that would be taking place there now if Saddam were still in power.
There’s a lesson in this for those who would have us believe that what this cartoon conflagration represents is a conflict of civilizations. There is a conflict all right, not between civilizations, but within one, and it pits those who would make Islam barbaric and those who would keep it civilized. In that struggle, the heirs of Socrates and the heirs of al-Farabi must make common cause.

“I ask our dear people to prepare themselves for a great struggle,” he added, evoking the possibility of international penalties. “Fasten your seat belts and pull up your sleeves.”
. . .
In his speech at the rally, Mr. Ahmadinejad repeated his much-publicized claims that the Holocaust was a myth, and he made reference to the wave of demonstrations in the Arab world over the publication of caricatures of the Prophet Muhammad in some Western newspapers.

At the same demonstration, Ahmadinejad said on Saturday that the Palestinians and “other nations” will eventually remove Israel from the region. New Sisyphus, commenting on those words, says,

Ladies and Gentlemen, it pains me to say this, but it can no longer be in doubt: we are going to war again, probably soon, and in the not too distant future the weekend we’re having right now will be looked back upon as the “good old days.”

Last Wednesday I posted on Iran’s increased connections with Cuba and Venezuela. While this is an extremely serious matter, particularly if Hugo and Fidel’s scheduled Bolivarian Revolution takes place, Elephants in Academia posts that the Bolivarian Revolution’s not coming along quite as planned: There’s a new level of anti-Castro fervor in Cuba, plus

If he [Human Rights Commission President Elizardo Sanchez] is [correct], the situation in Cuba forms an interesting counterpart to other developments in Latin America, notably the plumeting poll numbers of Socialist Ollanta Humala in Peru, the disintigrating relations between Hugo Chavez and Evo Morales, and the increasing unrest in Venezuela itself. Maybe Mr. Chavez’ and Mr. Castro’s dream of a “Bolivarian Revolution” that would result in a single, Socialist Latin American state is being revealed as just that: a dream, and a pipe one at that.

Robert Mayer has some additional thoughts on the situation in Cuba.

Via Babalu, a must read: Ayatollah Fidel and Iran’s Cuban vacation, which not only talks about nuclear weapons, but also how Cuba gives Iran dual-use biotechnology in exchange for oil and an annual $25 million trade credit.

With his characteristic tact, Hugo rejects ‘attack’ by Blair

He was responding to comments by Mr Blair, urging Venezuela to abide by the rules of the international community.

At other blogs, Sigmund, Carl and Alfred discuss The Tinfoil Hat Brigade and Still Blaming the Victim, and ShrinkWrapped Liberal Dis-Armament

Courage in Paris: Islamic Protestors in Paris Come Face to Face with an Unexpected Counter-Protest
Watch the video: 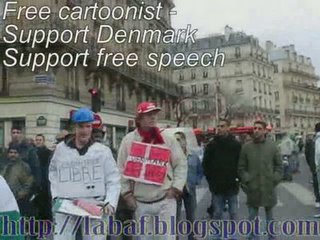 Update In England, Scott explains how the Cartoons of Peace Inspire Another Muslim Metamorphosis
Alexandra ponders The Crimson Tide.