Cartoon jihad: Anti-cartoon lawsuit thrown out of court in France, and a Spanish comic magazine puts its 2 cents worth
Not all the European press has lapsed into dhimmitude: 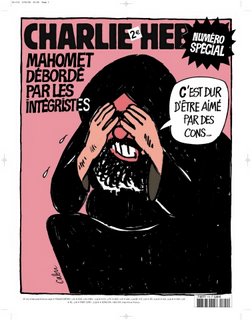 Mohammed overwrought by the fundamentalists:
“It’s tough being loved by these idiots!”

CFCM, France’s equivalent of CAIR has called for the issue to be seized. Good luck with that.

You saw it here first.

The editors of Charlie Hebdo (who’s humor we often find pretty repugnant) explain [link in French] they are interested in showing solidarity with the France-Soir editor who got sacked, to defend freedom of expression, and to show solidarity with the Danes.

Charlie-hebdo featured the prior cartoons (my translation): 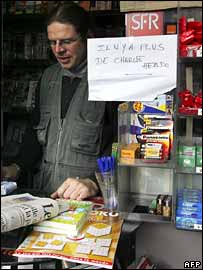 Eleven of the sixteen pages of the newspaper are devoted to the caricatures: in addition to the twelve drawings of Jyllands-Posten, the newspaper proposes other caricatures of Mohammed but also of the representatives of other religions, plus analysis and debate.

A judge rejected the CFCM complaint over a technicality, but the CFCM and other French Muslim associations declared that they intend to sue Charlie-hebdo and France Soir. Charlie-hebdo, with a normal circulation of 100,000 issued the special edition with 160,000 copies. update, which promptly sold out, while Chirac, calling the Charlie-hebdo story “an overt provocation”, asks the media to avoid offending religions. The weekly was printing another 150,000 copies for tomorrow.

Philippe Val, Charlie-hebdo editor, explained in an interview (my translation with link to my prior post),

It is outrageous that a newspaper editor is fired from having published religious caricatures [France Soir editor Jacques Lefranc], when we have just celebrated the centenary of the separation of the Church and the State in our country.

When asked if he wasn’t worried about being labeled as Islamophobic, (my translation; emphasis mine):

The concept of Islamophobia was invented by the Ayatollah Kjomeini to cut short any criticism. I am astonished to sometimes hear this word in the mouths of people of the left and the extreme left. Religious criticism is entirely different from racism. As for religious taboos, only people who adhere to a religion are worried about those, not everybody else. . . As for the most contentious drawing, the one with Mohammed carrying a bomb as a turban, that is precisely the vision of the religious extremists, those which justify the terrorist acts in the name of Mohammed. They reproach us the right to draw their own vision of their prophet. They exert unacceptable pressures on the governments, they insult democracy. We cannot accept it. We are not the malicious ones but one should not be afraid, one must dare, one does it.

France2 news has a video (click under Charlie Hebdo : organisation musulmanes déboutées) with Mr. Val and Wolinski, the cartoonist who did the cover, repeating their stance on freedom of expression. Barcepundit has more.

while the Beeb refers readily to Mohammed as the “Prophet Mohammed”, I have never once outside of the religious service broadcasts (which disappeared with a smart sounding rationalization more than a decade ago,) called Jesus “Lord Jesus Christ”.

Eurosoc notices that the Beeb’s

every time the Prophet is mentioned in the BBC’s supposedly neutral text, his name is followed with the abbreviation “(pbuh)” – as if, as Wyatt notes, “the corporation itself were Muslim.”

So it looks like the big Beeb’s lapsed into dhimmitude — if not conversion — and outright negligence, while the small independent papers are growing two brass ones. Here’s another instance:

Barcepundit also has the hilarious front page of Spanish humor magazine El Jueves (Thursday), which has the motto “The Magazine that comes out on Wednesday) 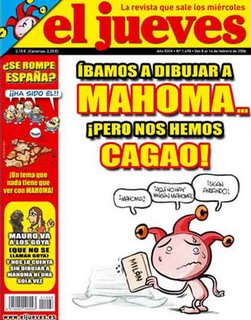 The words in large yellow letters say, “We were going to draw Mohammed . . . but we crapped ourselves!” while the character says “Mohammed? There’s no Mohammed here! Move right along!”.
The two stories on the left margin read “Is Spain breaking up?” with some characters pointing at each other saying “He did it!”, over a map of pieces of Spain, with the subheading “A subject that has absolutely nothing to do with Mohammed!”, and another story titled “Mauro goes to the Goyas [the Spanish Oscars] (which are not called the Goyas) and he tells us about it without drawing Mohammed even once”.