French editor publishes cartoons and gets fired: toon tales
In the USA, a cartoon that offends the troops gets published, the Joint Chiefs send a letter, and everybody keeps their jobs: Joint Chiefs Send Rare Protest Letter to ‘Wash Post’ Over ‘Reprehensible’ Toles Cartoon. More importantly, the article reporting it ends criticizing the Joint Chiefs. Here‘s the cartoon.

In Denmark, cartoons that offend Muslims get published, and all hell breaks loose: gunmen seized an EU office in Gaza, Danes get beatings on the streets of Saudi Arabia, Danis flags get burned, Syria recalls ambassador from Denmark over cartoons
Fatwa against Danish troops
Danish newspapers and a blog get cyber attack.

In the middle of this onslaught, Italy’s Corriere de la Sera and newspapers in Spain, the Netherlands, and Germany have run the cartoons, defending free speech.

The editor of France Soir not only carried the cartoons, but added one on the cover: 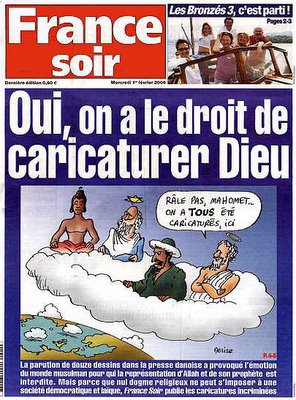 France Soir’s owner, who is Egyptian, fired the editor, as a “token of respect for faith and conviction”. More at the BBC

Jacques Lefranc was dismissed by the owner of France Soir, as his paper became embroiled in a developing row between Muslims and the European press.

The BBC article also has a timetable:

Al-Azhar intends to protest these anti-Prophet cartoons with the UN’s concerned committees and human rights groups around the world.”

The UN was happy to take the case. The UN High Commissioner for Human Rights, Louise Arbour, wrote to the OIC: “I understand your attitude to the images that appeared in the newspaper. I find alarming any behaviors that disregard the beliefs of others. This kind of thing is unacceptable.” She announced that investigations for racism and “Islamophobia” would commence forthwith.

Pieter Dorsman has been blogging on the Danish boycott, Christ, and Freedom (part II), and a cartoonist speaks. Pieter also links to this article, which explains how the Danish cartoons were used for propagandistic purposes to incite the outrage: Alienated Danish Muslims Sought Help from Arabs

Akkari and his group traveled together to Cairo, where they visited Al-Azhar University, which has a reputation for building bridges between Egypt and Europe. Akkari said he wanted to draw attention to the racist climate in order to prevent a repeat of the Theo Van Gogh drama in the Netherlands.
. . .
Kaare Quist, a journalist at the Danish daily Ekstra Bladet, who has been reporting on the story for a number of weeks, says the group found a number of highly placed officials in the Arab World keen to listen to its message. Quist told SPIEGEL ONLINE they included representatives of the Arab League, Egypt’s grand mufti and other high-level officials. The trip the group made, Quist believes, helped to raise attention to the political cartoons in Jyllands-Posten and prejudices against Denmark’s Muslims. some 270,000 of Denmark’s 5.4 million population are Muslim, making up 5 percent of the population.

Quist says the dossier they shared in Egypt may have been far more damaging than the Jyllands-Posten episode — and it may have further exacerbated misgivings between Denmark and the Arab world. In addition to the now notorious caricatures published by the newspaper which have now spread like wildfire in the blogosphere, it also included patently offensive anti-Muslim images that had been sent to the group by other Muslims living in Denmark. The origins or authenticity of the images haven’t been confirmed, but their content was nevertheless damaging. Quist says the dossier included three obscene caricatures — one showed Muhammad as a pedophile, another as a pig and the last depicted a praying Muslim being raped by a dog.

“The drawings in Jyllands-Posten were harmless compared to these,” he says.

For his part, Akkari said the more outrageous images were clearly separated from those published by the paper when the group met with Muslim leaders. “They were at the back of the folder,” he told Stiftstidende. By including them, the group sought to show the kind of hate they feel subjected to in Denmark.

Michelle Malkin has round-up and commentary. 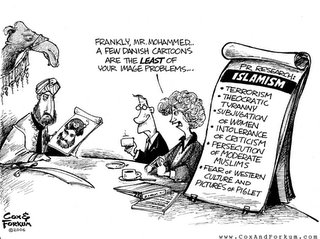 Dr. Sanity analyzes the situation, and Even France has more moxie than Bill.

As Spencer said in his article,

As it grows into an international cause célèbre, the cartoon controversy indicates the gulf between the Islamic world and the post-Christian West in matters of freedom of speech and expression. And it may yet turn out that as the West continues to pay homage to its idols of tolerance, multiculturalism, and pluralism, it will give up those hard-won freedoms voluntarily.

Stephen Pollard gets the final toon.

Brussels Journal has it all.