Venezuelan prisons, Bolivia, and Cuba
Saturday I was reading the following at The Economist on Venezuela’s Prisons: Efforts to humanise a hellhole

Venezuela’s jails, say prison-reform groups, have long been among the worst. On an average day, at least one prisoner dies violently, the result of overcrowding, the availability of drugs and guns, and a poorly trained and understaffed prison service. “If you don’t have a CHUZO (a handmade knife), you can’t survive in prison,” said Jesus Adirio Quiroz, an inmate.
. . .
The prisons, admits the interior minister, Jesse Chacon, “are warehouses for people”. Since Mr Chavez took office in 1999, eight interior ministers and 12 prisons’ directors have failed to stop the system from getting worse. That is now set to change, according to the “humanisation” team set up by Lieut-Colonel Erling Rojas, an army officer who is the new prisons director.

And who did Hugo call for help? Sweden, maybe? Denmark, perchance?

Long-term readers of this blog are familiar with my posts on Cuban prisons, from the mass killings directed (and conducted) by Che, to the latrine-like dungeons where political prisoners are kept.

Just another step into Cubazuela.

But we shouldn’t be surprised, since Chavez praised mullahs’ regime of Iran as an “outstanding model” 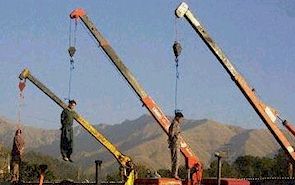 Chavez, in his acceptance speech, praised Iran as an “outstanding model” in the struggle against US imperialism, and said “the Iranian nation’s historical defeat of imperialism in the 20th century through the leadership of (the late) Imam Khomeini had made it possible for them to take control of their own resources.” “The imperialist US is against Iran because Iranians now control their own strategic resources and potentials,” said the president, who assured Iranians that Venezuelans were with them in their strugge.

Chavez, who distinctively called Sobhani the “special guest” in the ceremony, praised the “great” Iranian nation which, he said, is currently facing great pressure in the face of US ire.

In that, Hugo’s reading straight from Fidel’s script, as Cuba calls for enhanced ties with Iran. Bolivia’s Evo has been listening, and following his swearing in ceremony, the Chairman of the [Iranian] Majlis National Security and Foreign Policy Committee Alaeddin Borujerdi said that appointing a separate ambassador for Bolivia is one of the measures to be taken as soon as possible in order to develop bilateral ties (emphasis mine):

Morales had expressed hope that following the promotion of diplomatic relations between Iran and Bolivia, La Paz would also benefit from Iran’s potential in different technical and engineering fields as well as in the oil and gas sectors.

Maria Anastasia O’Grady of the Wall Street Journal (Friday Jan. 27, by subscription) is not as subtle describing the Axis of Evo

The most tragic aspect of Evo’s decision to let Cuba and Venezuela annex his country is where this all leads for the majority Indian population in one of the region’s poorest countries. Their hopes soared on Sunday as they watched one fo their own, from humble beginnings, sworn into the highest office in the land. They no doubt think that Evo — who rose to power by leading coca growers against crop eradication pushed by U. S. drug warriors — will care for his own in ways that the white, upper-class leadership never did. But Fidel long ago destroyed underclass hopes for a better life and Hugo is doing the same.

After six years of Chavez, Venezuelans, once ecstatic about their Bolivarian Revolution, are sinking deeper into poverty. Fidel’s largely Afro-Cuban population is destitute after almost 50 years of El Máximo Lider.

Not everything’s going to hell on a handbasket – in Cuba, there’s a new TV channel,

This station, with an informative and cultural profile, is included in the country´s efforts to raise the intellectual and educational level of all Cubans

Fidel gets CNN, though.

In a lighter vein,
The wall of impotence is coming right along in Havana. Val has the details. 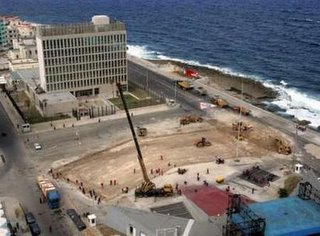 I can’t wait for Fidel to finish the current construction project so the Americans can move the sign to the other side of the building.

Update Living in the epicenter of nihilism in Latin America While I disagree with the author since I believe that the Latin American countries themselves are responsible for their own situations, it’s an interesting article.

Update 2 Bear Baiting Revisited: Venezuela and Iran, on Hugo’s threat to ‘lock up’ US spies.