The retired Mossad deputy head Kimche says the mission was not just about revenge but striking fear into the hearts of terrorists. Referring to an incident described in the book, he said: “We tried not to do things just by shooting a guy in the streets, that’s easy – fairly. By putting a bomb in his phone, this was a message that they can be got anywhere, at any time and therefore they have to look out for themselves 24 hours a day.”

In other stories,
Michael Fumento has a very good article at National Review on a prior article (also at NRO) written by Cathy Seipp. I have posted earlier on Fumento, and have found his work to be well researched and solid. Scripps dropped him without even bothering to get his side. Quite frankly, it’s deplorable that from Seipp’s viewpoint this is becoming a blogger-vs-blogger catfight. I applaud National Review’s decision to publish Fumento’s new article.
Update More at Michelle Malkin‘s. 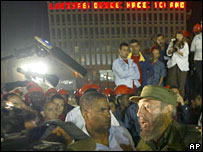 Fidel can’t wait to read on the news,
so he keeps visiting the US interests section neighborhood:

As he spoke, the huge US electronic billboard scrolled out its illuminated messages across the building behind him.

Fidel’s going to where the people are. Update ‘The Cockroaches Are Brave’.

Meanwhile, in Caracas, Evo handed Hugo a portrait of Bolivar made of coca leaves, which is as aesthetically pleasing as a velvet Elvis, but much, much more meaningful.

I pity “his” children.

Galloway got voted off the house. He was booed by the people waiting outside.

Meanwhile, Right Wing Nut House is hosting the Carnival of the Clueless this week. A must-read!

The Canadians are testing out a system that pairs onboard Global Positioning Satellite (GPS) technology with a digital speed limit map. It works very much like the in-car GPS navigation systems that have become so common on late model cars — but with a twist. Instead of helping you find a destination, the system prevents you from driving any faster than the posted speed limit of the road you happen to be on.

I know a Canadian or two that will leave the country if that happens.

Fear of lawsuits makes manufacturers come up with warnings on everything, including cocktail napkins: Warning: Do not try to read this column while navigating. Now Teflon chemical on EPA hit list: Ingredient set to join lead, other pollutants. I don’t own any Teflon pans and prefer stainless steel, or well-seasoned cast iron, but it’ll be a matter of days before class lawsuits start popping up.