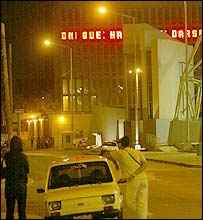 Electronic streaming messages hit Fidel in the gut
I haven’t had this much fun reading a news item since John Kerry was tossing footballs:

The U.S. Interests Section in Havana has a new electronic ticker-tape billboard, which they recently erected on the side of the building. They’ve been using it, Times-Square style, to broadcast news items, and also quotes on the subject of liberty by people such as Abraham Lincoln.

I’ve never underestimated Castro’s ability to manipulate the media (an excellent example was the Elian Gonzalez case), but this time he shot himself in the foot. With Elian and his father leading, Fidel had a million people show up to demonstrate against the billboard. (Go to the BBC site and click on BBC NEWS: VIDEO AND AUDIO See Fidel Castro address the protest. Elian & his father are 1 minute into the video).

Fidel sure gave a lot of people a chance to see for themselves:

Just as the 79-year-old leader was about to speak to the masses, American diplomats couldn’t resist taking advantage of a captive audience and lit up the electronic ticker-tape billboard recently displayed on the side of the building.

The Miami Herald has details, and also the Houston Chronicle: Castro, U.S. officials face off with billboard broadsides: Cuban leader’s latest mass protest is met by mockery in an electronic streaming message.

Val Prieto‘s gleeful. Paxety has photos and photoshop. Cuban-American Pundits have commentary. Uncommon Sense has the quote of the year. (LANGUAGE ALERT) KillCastro minces no words and has more details on the demonstration.

The billboard comes after Condoleezza Rice has announced the creation of a new post to help “accelerate the demise” of the Castro regime in Cuba.

BTW, if you read any headlines today on Cuba’s healthcare system, read this, too.

Update Sigmund, Carl and Alfred emails supporting the idea of such ‘zipper’ boards outside every US Embassy- especially, Syria, Lebanon, Saudi Arabia, etc. 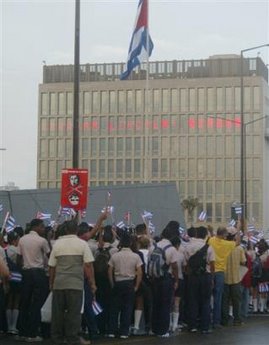 The passages were interspersed with sections from the Universal Declaration of Human Rights, promising freedom from arbitrary arrest or exile, and inspirational sayings from anti-communist leaders such as Poland’s Lech Walesa and the Czech Republic’s Vaclav Havel.

Update 3: Elephants in Academia has a thoughtful post on Lincoln’s words, “No man is good enough to govern another man without that other’s consent”, which were flashed on the billboard.