Conservatives win in Canada, following up on Fumento, Hispalibertas, and today’s stories
The Conservative Party won the Canadian elections. Pajamas Media has a round-up. Lost Budgie had been watching the news on election day. At Peaktalk,

Canada voted for change, but very cautiously. The Conservatives have a tenuous mandate, but will probably have some time to prove that they have what it takes to lead the nation and earn its confidence. Expect them to start delivering on the easier (read: more centrist) parts of their platform. If they can do this successfully they may be able to expand on their newfound popularity in Ontario and Quebec and become a truly national party with future potential to win a majority.

Following up on Fumento
Mike Fumento posts on his blog how the LA Times disgracefully states that he had “accepted payments from Monsanto for writing opinion pieces favorable to its bio-tech business”, which, as readers of this (and his) blog know, is an all-out lie. Like Mike says, “Journalist ethics” an oxymoron at the LA Times.

Excellent news from Spain
Hispalibertas inaugurates its periódico ciudadano, in Spanish. I’m honored to be among its contributors.

The optimists
From that arm of the vast right-wing conspiracy, Iraqis and Afghans are the among most optimistic people in the world.

Marching for life and against the “Negro Project” by La Shawn Barber. 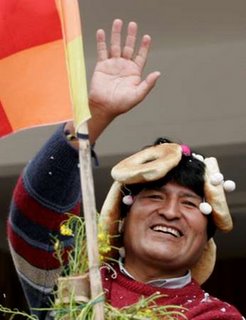 Must be a Bolivian thing. If you did that in Puerto Rico, they’d put you away faster than you can say “cream cheese”.

In a more serious vein,
Thomas Sowell on Political corruption. John Fund explains How to Cure Pork, And how big government produced the Abramoff scandal. Speaking of corruption, Gateway Pundit takes a look at The Clinton Legacy, while a Full Report on Clinton Years Is Sought by GOP Senators

Bernard Miniter’s Plenty of Checks, No Blank Ones is a must-read

There is, of course, also a legal and constitutional argument to be made in favor of the wiretaps. Homeland Security Secretary Michael Chertoff, a former top Justice Department official who has also served as a federal judge and a prosecutor, dropped by The Wall Street Journal’s offices recently and made a compelling legal and constitutional case for the wiretap program in four succinct points:

Â The very language of the Fourth Amendment to the Constitution invites using a “reasonable” standard in deciding when to conduct searches.

Â During the Cold War it was widely accepted that the federal government had the power to use radar to spot incoming Soviet bombers and missiles. Wiretaps are today’s equivalent of the Cold War’s radar because instead of Soviet missiles, we’re confronting terrorists who would bring themselves and possibly small bombs in suitcases into the country.

Â The FISA court itself has found that the Foreign Intelligence Surveillance Act does not curtail the president’s constitutional ability to conduct warrantless searches.

Â The government is not listening to phone conversations that take place entirely within the United States. Each one of the calls monitored involves someone either calling from or calling to a foreign number (in addition to involving at least one suspected al Qaeda operative). It’s long been accepted that the federal government has a wide latitude to conduct searches at the nation’s borders, which is why passenger luggage, container ships and other things can be searched as they cross into the country without first getting a warrant.

Pres. Bush gives an important speech on this matter, so what do they ask him about?

It’s the euro’s fault, many Europeans say, when it comes to inflation.