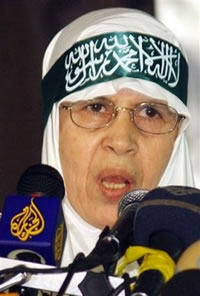 Um Nidal, death cult monster
Last night I was watching France2 News and they had a report on Palestinian candidate for Hamas party Um Nidal. (20 minutes into the program: click on Législatives palestiniennes: focus sur une candidate du Hamas in the sidebar.)

No one personifies better the death cult of Palestinian politics better than Um Nidal.

The France2 news report showed video of Nidal preparing one of her sons for a homicidal mission through suicide by telling him “Don’t come back until you complete your mission”. [Update, January 24: France2 no longer has the video in its broadcast, but it’s available from Palestinian Media Watch at http://www.pmw.org.il/asx/um_nidal.asx. The subtitles read, “his mother hugged him at length. . . ordering him not to return to her except as a shahid”.] Clearly, this is a woman who’s not working on reality as we define it. Independent Media Review Analysis describes how she

participated in a farewell ceremony in which she sent her 17-year-old son to die through terror, “ordering him not to return except as a shahid [martyr for Allah].” In an interview recorded after her son murdered five Israeli teenagers in a suicide mission, she explained that it was a mother’s love for her son that motivated her to be joyous over his Shahada death.

If you watch the France2 broadcast you can see the video of the ceremony, which is clear enough even if you don’t understand the language.

Three of her sons, clearly under her “guidance” have died committing terrorism acts; Associated Press refers to them as martyrs.

Um Nidal’s real name (Um Nidal means “mother of struggle”) is Mariam Farahat. It would be difficult to find anyone less worthy of the term “mother”, but, as Independent Media Review Analysis points out,

Um Nidal’s parting ceremony and interview were filmed, and turned Um Nidal into a heroine and role model in Palestinian society.

A role model — for a monster.

Update, Tuesday January 24: When mothers send their children off to kill and die- and are applauded for it- it is clear to all that the Palestinians are not yet ready to join the ranks of the civilized world.
The video at Palestinian Media Watch is a campaign video for the Hamas Party.