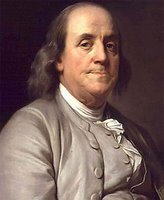 He was born in Boston on Jan. 17, 1706. His father was a candle- and soap-maker who married twice and had 17 children. Ben was the youngest of 10 sons. He learned to read at an early age but had just two years of schooling. Ben went to work at age 10, first for his dad, then for an older brother as an apprentice printer.

Franklin ran away to Philadelphia at age 17. He made a fortune as a printer and publisher, and he retired at age 42 to pursue his many other interests.
. . .
Historians call Franklin the First American. He was a self-made man with middle-class values, an entrepreneurial spirit and a genius for founding quintessentially American organizations such as the volunteer fire department.

Christopher Hitches says Benjamin Franklin was the Socrates of his day, and Revolutionary, and Conservative

Unlike most revolutionaries, he was a conservative. He did not, for example, join Benjamin Rush and Thomas Paine in the Anti-Slavery Society until quite late in his life. I think it may have been John Maynard Keynes who observed that conservatives often make very effective revolutionaries, in that they have tried to make the existing system work and have come to understand very clearly why it must be changed. Benjamin Franklin offered to pay the damages of the Boston Tea Party. If the British authorities had not treated him in such an arrogant and underhanded manner, and had not had such a paltry idea of the man with whom they had to deal, he would very probably have negotiated a brilliant settlement of the outstanding disputes between the colonies and the motherland. This was certainly his wish. But as it was, his full talent as a diplomat was only disclosed when he became the first and best envoy of the American Revolution.

Franklin’s last public act was a plea to Congress to abolish slavery.

Today is Benjamin Franklin’s 300 year old birthday. Or, at least it is the second of his birthdays since, in 1752 we moved ahead 11 years to get in line as we moved from the Julian to the Gregorian calendars.

My Visit to the World likes that.

Today in History has a report on The Pragmatic Innovator. They link to Touring Turn-of-the-Century America, 1880-1920, which covers a period well after Franklin’s lifetime.

By the way, did you know that, in their time, Franklin was fifty years older than Mozart?

Recommended reading: Franklin’s own Autobiography, and Walter Isaacson’s Benjamin Franklin: An American Life (click on links above). I loved the Autobiography. The Husband highly recommends Isaacson’s book and says, “Franklin came across as a real person. And [Isaacson] makes it easy to understand why he was so influential with his peers”.

Philadelphia events honoring Franklin
including a parade, listed at the Philadelphia Inquirer, and at philly.com

Update, Wednesday January 18 Smadanek likes the Franklin exhibit at the Constitution Center.
LGF links to the free text of the Autobiography
The Franklin Tercentennary website, via Mister Snitch!