Home remodelling advice, Counter-counter recruiting fun, Ecuador’s dollarization, crying games and more
Sigmund, Carl and Alfred offer advice to The Renovating Blogger, on (of course) home remodelling, which he describes as “a curious form of self-flaggelation” that afflicts those addicted to HGTV. SC&A lists eleven points, starting with

1) You aren’t a man until you’ve been through a reno. Your husband knows this to be true.

I feel their pain.

Counter-counter recruiting fun
at Kesher Talk, with pictures, in front of the Army Recruiting office on 22d street in Manhattan.

Dollarization
in Ecuador, discussed at Publius Pundit
Hugo, however, proposes ‘Bank of the South’ (link via Maria). I’ll venture a guess as to who’d control the money . . . 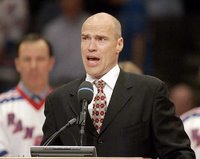 “This is like every big game I ever played condensed into one night,” said Messier, who had to stop several times to wipe away tears and wait for his strong chin to stop quivering.

Speaking of the Alitos, Atrios complains that

Mrs. Alito is not the name Samuel Alito’s wife goes by. In news reports she’s always referred to as “Martha-Ann Bomgardner.” I have no idea what her ethnicity is, but her surname doesn’t scream Italian.

I don’t recall Mrs. Alito/Ms Bomgardner turning up at the hearings wearing a baseball cap that said “KISS ME I’M ITALIAN”, but apparently that’s an important issue at that blog — it generated over 400 comments, most of them deplorable. More important, however, via MaxedOutMama, a summary study of Judge Alito’s cases. Reuters says Alito appears headed for confirmation (link via Maria).

French crisis
After 45,000 Torched Vehicles in ’05, French Crime Is in Crisis. ¡No Pasarán! has more.

Maria’s articles:
Saddam’s Documents: What they tell us could save American lives today

A less benign explanation for the Bush Administration’s lethargy is that its officials don’t want to challenge the prewar CIA orthodoxy that the “secular” Saddam would never cavort with “religious” al Qaeda. They’ve seen what happened to others–“Scooter” Libby, Douglas Feith, John Bolton–who dared to question CIA analyses. Mr. Hayes reports that the Pentagon intelligence chief, Stephen Cambone, has been a particular obstacle to energetic document inspection.
But if we’ve learned nothing else about U.S. intelligence in the last four years, it is that its “consensus” views are often wrong. The 9/11 Commission has confirmed extensive communication between Saddam’s regime and al Qaeda over the years, including sanctuary for the current insurgent leader in Iraq, Abu Musab al-Zarqawi. We have also learned that in the years leading up to his ouster Saddam had implemented a “faith campaign” to use fundamentalist Islam as a tool of internal control. Especially if U.S. troops are going to remain to help the new Iraq government defeat the terrorists, we should want to know everything we can about them.

Terror and the Left
On the Left, Terror, and Friends. Author David Hornik has three suggestions why the Left persists in explaining terrorism as “It was we, our arrogance, our insensitivity, our one-sided narrative, that drove this desperate person to do this.” Dr. Krauthammer reviews the movie Munich:

It takes a Hollywood ignoramus to give flesh to the argument of a radical anti-Semitic Iranian. Jewish history did not begin with Kristallnacht. The first Zionist Congress occurred in 1897. The Jews fought for and received recognition for the right to establish a “Jewish national home in Palestine” from Britain in 1917 and from the League of Nations in 1922, two decades before the Holocaust.

But the Jewish claim is far more ancient. Israel was their ancestral home, site of the first two Jewish Commonwealths for a thousand years — long before Arabs, long before Islam, long before the Holocaust. The Roman destructions of 70 A.D and 135 A.D. extinguished Jewish independence but never the Jewish claim and vow to return to their home. The Jews’ miraculous return 2,000 years later was tragic because others had settled in the land and had a legitimate competing claim. Which is why the Jews have for three generations offered to partition the house. The Arab response in every generation has been rejection, war and terror.

Blogs and freedom of expression:
Brian C. Anderson at City Journal writes on The Plot to Shush Rush and O’Reilly: Talk radio, cable news, and the blogosphere freed U.S. political discourse. The Left wants to rein it in again.

Are the hundreds of political blogs that have sprouted over the last few years—twenty-first-century versions of the Revolutionary era’s political pamphlets—“press,” and thus exempt from FEC regulations? Liberal reform groups like Democracy 21 say no. “We do not believe anyone described as a ‘blogger’ is by definition entitled to the benefit of the press exemption,” they collectively sniffed in a brief to the FEC. “While some bloggers may provide a function very similar to more classical media activities, and thus could reasonably be said to fall within the exemption, others surely do not.” The key test, the groups claimed, should be whether the blogger is performing a “legitimate press function.” But who decides what is legitimate? And what in the Constitution gives him the authority to do so?

A first, abandoned, draft of proposed FEC Web rules, leaked to the RedState blog last March, regulated all but tiny, password-protected political sites, so bloggers should be worried. Without a general exemption, political blogs could easily find themselves in regulatory hell. Say it’s a presidential race, Condi Rice versus Hillary Clinton. You run a wildly opinionated and popular group blog—call it No to Hillary—that rails daily about the perils of a Clinton restoration and sometimes republishes Rice campaign material. Is your blog making “contributions” to Rice? Maybe. The FEC says that a “contribution” includes “any gift, subscription, loan, advance, or deposit of money or anything of value made by any person for the purpose of influencing any election for Federal office” (my italics). If your anti-Hillary blog spends more than $1,000, you could also find it re-classified as a “political committee.” Then you’ve got countless legal requirements and funding limits to worry about.

On a lighter vein
New CDs for your enjoyment, and favorite cookbooks on the Bookshelf.

For the cookbooks, I chose two classics: The Joy of Cooking for American cooking, and Puerto Rican Cookery for Puerto Rican. I also listed Juntos en la cocina, in Spanish, by the author of Puerto Rican Cookery.
For fun, The Seduction Cookbook.
Healing Secrets of the Seasons sounds too New-Age for my taste but I received it as a birthday gift a while ago and have found it to be a nice source of ideas for seasonal foods.
Last but not least, Penelope Casas’s The Foods and Wines of Spain has many classic Spanish recipes “translated” for American measuring units and easy-to-find ingredients while retaining the classic Spanish flavor.