Two murderers, going free
In Spain, Day of reckoning for terrorist who killed man who saved him
Ramón Baglietto saved a woman and her baby from being run over by a truck. Nineteen years later, the baby, Kandido Azpiazu, grew up to be a terrorist, and blew his rescuer up in an Eta terrorist attack (emphasis mine):

He was sentenced to life in prison and on his release added insult to injury for his victim’s family by opening a shop directly under the flat where Baglietto’s widow lives. He made no attempt to hide the fact that the glassware shop was his business, presenting her with a daily reminder of the killing that had devastated her life.

But yesterday, almost 26 years after the murder, the widow Pilar Elias cleared a significant hurdle in her long-running battle for compensation.

In a case that will resonate far beyond the town of Azkoitia — and have repercussions for hundreds of other terrorism victims —the leading anti- terrorist court, the Audiencia Nacional, ruled that the widow had a strong case for compensation and that it would investigate whether Azpiazu should be liable to surrender his goods, in the form of his shop, to Señora Elias.

The court decision is the first time the Audiencia Nacional has ruled that the goods of former Eta prisoners may be seized by their victims or relatives by way of compensation. 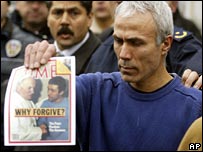 In Turkey, Man who shot Pope freed from jail. But you’ll say, is he a murderer? Yes,

The gunman was pardoned by the Italian authorities in 2000 and extradited to Turkey, where he was jailed for the 1979 murder of a left-wing Turkish journalist and two bank robberies.

Last week, a Turkish court ruled Agca had completed his term for those offences.

As for John Paul II, he wrote, “Someone else planned and commissioned” the plan to kill him.

The latest bizarre twist in this long-lasting mystery story is that Agca himself says he wants to return to Rome as soon as possible to meet John Paul’s successor, Pope Benedict.

I don’t think this is the end of this story.