Sharon back in surgery, Power and the Idealists, a big deal, The World’s Worst Disease, and other articles
Stricken Israeli Prime Minister Ariel Sharon is undergoing an emergency operation after a scan revealed fresh bleeding in his brain. Update Ariel’s Mission.
Do We Now Return to the Garden of the Finzi-Continis?
Via Rantings of a Sandmonkey, yet another instance of Palestinian Child Abuse.

Berman’s goal is clear: At a time when many leftists’ animosity toward George W. Bush has blinded them to the iniquities of al Qaeda, the Taliban, Saddam, et al., not to mention the best interests of people who’ve suffered under tyranny, he wants to hold up Fischer, Cohn-Bendit, and Kouchner as models of reflective and principled interventionist leftism. Fine. One problem here, alas, is that all three of these men have, in their time, done things that raise serious questions about their principles and powers of reflection. Fischer, for example, brutally beat up a cop at a 1973 Frankfurt street protest; Cohn-Bendit hid a fugitive whose group had helped coordinate the 1972 Olympics murders. While reporting candidly enough on these and other episodes, Berman prefers to see them (with excessive generosity) as eminently forgivable missteps made in their youth by men who have since developed a mature wisdom deserving of emulation. Whatever. Bottom line: he’s out to convince readers that if they stop cheering George Galloway and linking arms with Islamofascists at antiwar rallies and instead join his trio in (as he sees it) supporting “liberal antitotalitarianism”—i.e., siding with freedom against oppression—they’ll still be able to call themselves leftists. It’s ironic: Berman’s New Republic article recounted the supposed awakening of the European left; to read the book that’s grown out of it is to be intensely aware of just how many leftists are still sound asleep.

I haven’t been able to read the book yet because of time constraints, but will have to.

A big deal
Via Venezuela News and Views, Bolivia to pay diesel fuel with agricultural products

Chávez informed that in the short term, Venezuela would supply the 150,000 barrels per month of diesel fuel imported by Bolivia at an approximate cost of USD 150 million. “I will not accept you paying us a cent. You are going to pay us in agricultural products,” Chávez told Morales.

It’s not cancer or AIDS or avian flu; it’s a monstrously flawed idea. The sickest thinking–and the source of most of human misery throughout the ages–is based on the following beliefs:

• The Earth is running out of resources;

• People consume more than they contribute;

• Wealth is a zero-sum distribution game.

History overwhelmingly refutes these ideas; otherwise, humankind would still be living in caves, sharpening spears for the hunt. Our lives would be brutal and short, lasting on average about 30 years. We’d enjoy no books, movies or iPods; we’d drive no cars to visit grandma over the holidays; we’d savor none of her gooseberry pie if the economic pie hadn’t been growing all along.

Yet most politicians, economists and journalists act as if growth were a mirage and wealth a zero-sum game. What else accounts for last November’s headlines yelling about GM’s cut of some 30,000 jobs? Does the creation of 30,000 jobs get equal treatment? Why not? That’s about how many jobs are born in the U.S. every six days.

Read all of it.

Lucky girl
$1,240/month rent for 2 bedrooms in Manhattan, furniture, and an antique Steinway. Very cool. And no need to sign up for the gym – it’s a fifth-floor walk-up.

Tatts
At Buzz Machine, on the Paris Hilton of bloggers. Update: More at The Conspiracy to Keep You Poor and Stupid.

Just when you think Pat Robertson can’t disgrace himself any further, he opens his mouth again
Disgusting.

The Rolling Stones would be too old to watch their own Super Bowl performance, organisers have ruled: only people aged between 18 and 45 are eligible. Mick probably has shoes older than that.

From Maria
A photo: 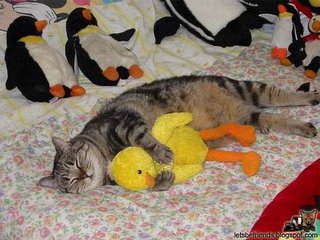