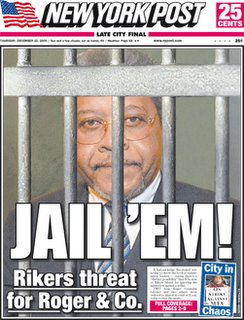 Wolcott sides with the union, and says,

Predictably, rightwing bloggers are bouncing off their padded walls angrily demanding that the union be crushed and its leaders jailed. Some have even begun using Reagan as a verb, as in, “Somebody needs to Reagan the TWU the way he did the air controllers’ strike.”

I am thrilled to have been linked to by Mr. Wolcott, but hasten to clarify that there’s no padding here at F’sB. The walls, like everything else Fausta, are all organic, with no artificial additives.

If Mr. Wolcott would care to read again my post, he’d realize that the first objection I list to the TWU action is

the local union has decided to undermine the international union

and that the only other text (aside from Update times) I emphasized in bold print refers to the deleterious effect the strike has on the union’s members. Anyone can verify that with a cache screen shot, if you care to.

In fact, the one way the TWU might survive this ordeal may be that its membership repudiate the strike and follow the TWU International by “going back to work, en masse”, as quoted in yesterday’s Daily News. Should the remaining workers that haven’t returned to work by then be fired? Of course.

Toussaint is the president of the union local, he is not the union. Of course, Mr. Wolcott and any visitor to this blog may interpret “Bust Toussaint” as synonymous with “bust the union”, but I suggest that it’s not the same.

Jeff Jarvis says Excercise will be good for [Wolcott].

At the NY Sun: Kalikow Warns Talks May Be ‘Futile’

The intensification of warring words between Mayor Bloomberg and the president of the transit union, Roger Toussaint, means both sides have dug in for a protracted strike.

The drama comes to a head today when Mr. Toussaint appears in Brooklyn Supreme Court, where Judge Theodore Jones, who levied a $1 million a day fine against the union Tuesday, will decide whether to send the union leader to jail. Judge Jones said yesterday that jail time was a “distinct possibility” for Mr. Toussaint and his top two deputies for violating an injunction barring the union’s leaders from inciting or authorizing a strike.

To which I say, make it a certainty, Judge!

At the NYT, Resolution to Transit Strike May Be Imminent

Let’s hope the NYT is right.

Via Mara, All Hail The New York Transit Worker

‘Twas five days before Christmas and all through the town;
Not a train was up running, they’d all been shut down.

The turnstiles were locked and the stations were cleared,
in hopes that Old Bloomberg would give them their share.
Don’t miss the rest.

Meanwhile, “Al Sharpton and other black leaders blasted Bloomberg for calling union leaders “thuggish” on Tuesday. They said the comment was racist because the union is less than 30 percent white”. Hey, Al, With Roger, all lose out.

Update: More at A Blog For All, Mister Snitch!, and Jane Galt

Update 2: Strike Blogging: It’s Joke Time
This PhD in Chemistry compares salaries in 1980, at the time of the prior transit strike.

12 noon: STRIKE TO END
Transit Union to Vote on Ending Strike Under Framework Set by State Mediators. No Timetable Is Announced on Resumption of Service
Light at end of the tunnel!
Union May Soon Send NYC Transit Workers Back to Work

Transit workers will take steps to restore service to New York’s buses and subways while the union and transit authority resume negotiations after a three-day strike, a state mediator announced Thursday morning.

No timetable was announced for the restoration of service.

At least 12 hours will be needed to get the city’s subways and buses back up and running, said New York City Transit spokesman James Anyansi.

You can go to 1010 Wins for live broadcasts.

When: If your tour has started, report immediately. If not, at your scheduled report time. If you are RDO, on your next scheduled shift.