Kofi chides the Times reporter, Power Line talks to the Times, and other news
James Bone of the London Times insisted on an answer over Kojo’s Mercedes, and Kofi got indignant: Kofi Annan lashes out at media over Oil-for-Food scandal

The outburst happened at Annan’s year-end press conference, when Bone mentioned a Mercedes-Benz which Kojo Annan imported into Ghana, using his father’s diplomatic immunity to avoid taxes and customs duty. He added that some of the Secretary-General’s version of Oil-for-Food related events “don’t really make sense”.

“Listen James Bone, you’ve been behaving like an overgrown schoolboy in this room for many, many months and years. You are an embarrassment to your colleagues and to your profession. Please stop misbehaving and please let’s move on to a serious journalist.”

I am shocked, shocked that Mr. Bone made bones over such a trivial matter as a Mercedes Benz, and in the presence of the Excelentísimo Kofi. (/sarcasm)

But the worst failing grade for the year goes to the United Nations and Kofi Annan. Paul Volker’s report on the Oil for Food scandal concluded that $10 billion worth of Iraqi oil was illegally smuggled to adjacent nations; that Saddam Hussein collected $229 million in bribes from 139 of 248 companies involved in the oil business, and illegal payments from 2,253 out of 3,614 firms providing humanitarian goods to Iraq. So Dennis Kozlowski stole $600 million from Tyco and got eight to 25 years in jail, while Kofi Annan supervised more than $10 billion in Oil for Food theft and will stay in his job since, in his own words, “the business of the United Nations is not reform.”

John Hinraker’s trying to engage the NY Times in a colloquy, and wrote to them:

I don’t think you should be quoting anonymous “officials” making incorrect assertions about legal issues, while not pointing out that their assertions are wrong. (I would also note that the NSA intercepts are not “inside the United States.”) And I don’t think that a partial sentence from one of the controlling decisions, buried at the end of a long article and not repeated in subsequent articles, removes the incorrect impression you convey that the NSA program is, in all likelihood, illegal. Also, with all due respect, I think your treatment of the 2002 FISA case is itself misleading.

He’s still waiting for an answer.

‘allo, Evo, is that you?
Via Babalu, The telephone conversation was cordial, and in the course of it Rodriguez Zapatero told Morales that the call he received from an impersonator on a show on Spain’s COPE radio was an “unacceptable” prank..
You can listen to the prank here, in Spanish, of course.

Maria’s articles of the day
Proud to be a conservative

On the subject of the NSA, Not a Suicide Pact and The Left’s privacy hypocrites. Also don’t miss ACLU Freedom of Information Request Would Gut NSA Program

The requests submitted today seek all records about “the policies, procedures and/or practices of the National Security Agency for gathering information through warrantless electronic surveillance and/or warrantless physical searches in the United States …”…. Information received by the organization will be made public on its Web site.

Or as Jay put it, 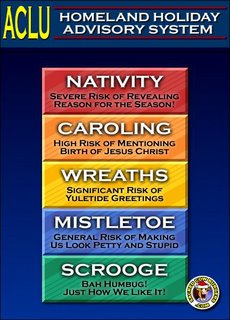