There was nothing fraudulent about it, and voter turnout was an amazing 80%. Bolivians who are celebrating this are happy because Morales is the first-ever indigenous Aymara president the nation has ever had. For people who have been shut out from the existing system, for whatever reason, it’s a great step forward to see one of their own in the highest office in the land.

But there is no question that this is not necessarily good news for the U.S.

In his victory speech, Morales has vowed to challenge the U.S., saying ‘long live coca, no to the yanquis.’ As recently as two days ago, Morales vowed to be “the United States’ worst nightmare.” He also vowed to ‘defeat the U.S. economic blockade’ which must be a line from Fidel Castro, as there is no U.S. economic blockade against Bolivia, other than the one Morales himself will create with his rejection of the free trade of the Americas agreement – something unlikely to make a difference in the U.S. Bloomberg reports that he has targetted Exxon and British Gas as his enemies two days ago. Morales also took this opportunity to denounce the ill-defined concept known as ‘neo-liberalism,’ which probably means IMF aid, but is also a code word for the U.S., which runs the IMF. Disliking neo-liberalism is one of those things that, if carefully defined, I usually hate, too. But this should not be confused with capital-L liberalism which is a different animal altogether and requires no IMF.

Jubilant Morales vows to be another thorn in the side of US but The Grauniad says he vows to help poorest of South America’s poor. At Babalu, castro’s new Bolivian mini-me has a photo of the ¡Three Amigos!, 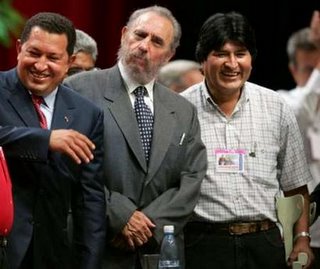 By pledging to be a thorn in the side of the US, Evo has insured himself endless praise as a-charismatic-leader-helping-the-poor-offering-free-health-care-education-adult-literacy-and-job-training-initiatives-that-help-millions for many years to come.

Venezuela: Daniel Duquenal has chronological report of what happened electorally in Venezuela since September.

Writing on the subject of elections, Fistful of Euros looks at the demographics of both countries.

Update The Miami Herald says Despite the strong showing, Morales may encounter difficulty implementing his policies because his Movement Toward Socialism party failed to win control over the Congress.
Bolivia in for bumpy ride

Politics in the Third World has long been principally a synonym for plunder. The sole variation from this boring theme lay in finding new and innovative alibis under which to commit the intended looting. Throughout the 1990s traditional elites operated under the banner of the free trade, economic liberalization and privatization — while doing nothing like that. Each time, the local elites were at pains to emphasize their theft was at the behest; indeed the compulsion of international lending institutions. Though economics in the Third World very often consisted of banditry planned locally; it was always attributed internationally, preferably to Washington; and for decades no one was overly concerned at this sickening charade because these dens of corruption were distant from the centers of world power. Until September 11.

While radical Islam is the best known form of chaos from the Third World it was merely the worst — but not the only — form of dysfunction. There were many other countries where things simply didn’t work, and where their overlords made a career of covering their crimes by claiming subservience to an ‘international’ program, as simple misdirection. The post-colonial world fell to pieces in a million ways; united only in a single, agreed-upon scapegoat: the USA. Chavez can be depended on to destroy his own country; as did Castro and as probably, will Evo Morales. Yet in the end, they too, will attribute their failings to America. What’s needed is some way to make each nation consciously responsible for its own destiny. Whether in Iraq or elsewhere, that’s the only way to go.