Museums, and two articles
Melik Kaylan of The Wall Street Journal proposes A Civilized Solution to Looted Art, namely to build “Getty museums abroad in the Guggenheim Bilbao manner to house its antiquities in style and to create a system of permanently shared collections.” It’s such a smart idea probably nobody will go along with it. 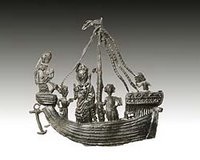 Speaking of museums, since today’s the last day of Dr. Fleming’s excellent class on Chaucer, I thought this article on The Museum of London Medieval Collections would be in keeping with the ocassion. For extra fun, go and make yourself your own historic tale using figures from the Bayeux tapestry.

After journalists became matinee idols, every bright young reporter had a new career goal. Forget honest, get-at-the-facts reporting. Henceforth the crowning ambition in the field was to bring down a president — especially one who wasn’t “our kind.” Failing that, turning the tide of a foreign conflict against Washington would do.

The other product of the Woodward-Bernstein cult was the rise of the self-adoring conviction that journalists were above patriotism, the law and common decency. Today’s Joe McCarthys aren’t on Capitol Hill — they’re in the newsroom. In lieu of Edward R. Murrow, we have Hedda Hopper masquerading as Joan of Arc.

Now we learn that Bob Woodward, the muckraker who became a groupie to the great, felt himself entitled to ignore his basic responsibilities as a citizen and journalist in the CIA leak case: He had information and withheld it from investigators.

His counterpart at the New York Times, Judy Miller (the loudest diva since Maria Callas), invoked the journalist’s exception to the rule of law in the opposite manner, grandstanding about protecting her source.

And Maria’s article of the day
Iraq Pullout Tougher than it Seems: Michael Fumento examines the situation on the ground.