Documents show that the intended target of the article on a democratic Iraq was Azzaman, a leading independent newspaper, but it is not known whether it was published there or anywhere else.

And let’s not forget those anonymous sources,

In addition to paying newspapers to print government propaganda, Lincoln has paid about a dozen Iraqi journalists each several hundred dollars a month, a person who had been told of the transactions said.

Not a person involved in the transactions, but a person who had been told of the transactions. And the editor of the Al Sabah newspaper did not know if his newspaper had printed any of it, whether labeled as advertising or not; never mind that no law prohibits the use of such covert propaganda abroad, to use the very words of the NYT.

That, however, is good news for the NYT. If you open the dead-tree paper today, after reading the front-page story, you’ll find on page A23 a full page full-color ad from PDVSA/CITGO: “HOW VENEZUELA IS KEEPING THE HOME FIRES BURNING IN MASSACHUSETTS”, with a photo of a nicely-appointed craftsman-style colonial single-family home decorated with Christmas lights. A house such is well beyond the reach of the average Venezuelan, who makes less in a year than it costs to run a color ad in the NYT on one day. The ad says,

We’re planning similar programs for New York and other cold-weather regions, where residents face both energy prices and reduced fuel assistance from the federal government. Venezuela has supplied most of the Northeast’s heating oil for many, many years.

Why are we doing this? Why would we put people before profits?

Because we’re not just any oil company. CITGO is a subsidiary of Petroleos [sic] de Venezuela SA (PDVSA), the state oil company owned by — and responsible to — the people of Venezuela. Which is why PDVSA partners with the government of Hugo Chavez to invest a portion of CITGO and PDVSA profits to support health, education, adult literacy and job training initiatives that help millions of Venezuelans.

The ad concludes with

This fuel assistance program isn’t about politics. It’s about offering humanitarian aid to those who need it. What could be more American than that?

What, indeed. For instance, what could be more American than having a full page ad on page 23 of Caracas’s largest paper saying something like “Which is why Halliburton partners with the government of George W. Bush to invest a portion of [insert local subsidiary name here] and Haliburton profits to support health, education, adult literacy and job training initiatives that help millions of Americans”, for instance.

Or to have the NYT mention, the next time they publish an article about how Chavez is a-charismatic-leader-helping-the-poor-offering-free-health-care-education-adult-literacy-and-job-training-initiatives-that-help-millions-of-Venezuelans, say that PDVSA/CITGO, organ of the government of Hugo Chavez, is one of its advertisers.

What could be more American than that?

Update, December 2: Even third-rate countries routinely use information and disinformation as an instrument of foreign policy, often against the United States. He must have been reading yesterday’s NYT! 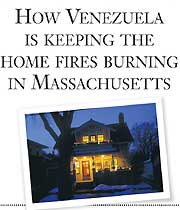