How to avoid identity fraud
Stealing Christmas, a must-read from Forbes

Those who charge President Bush and Vice President Cheney with lying to get America involved in the war in Iraq, as the New York Times columnist Frank Rich did yesterday, have a special obligation to get the truth correct themselves. It’s one thing for Mr. Rich to disagree with the decision to go to war in Iraq and to blame Mr. Bush and Mr. Cheney for the decision. It’s another for Mr. Rich to accuse our elected leaders of misleading the country while the columnist himself goes about misleading readers of The New York Times.

Frank Rich should have kept to doing movie reviews.

How do they compare Bush’s eight months in office to Clinton’s eight years of squandered prosperity, inaction on terrorism and missed opportunities to get Bin Laden?

Why Is No One Blaming Bill Clinton for Understating [the] Terror Threat?

Sir Paul and Lady Heather are so exercised by the plight of some cats and dogs that they will now refuse to travel to China, and are demanding a worldwide boycott of Chinese goods.

As for the imprisonment and judicial murder of thousands of dissident human beings, not a pip from either of them.

Not that anyone should be surprised. It is the same liberal mindset that lavishes praise on Fidel Castro as a hero, rather than condemning him as a tyrant. Castro learnt well from his Soviet backers, and rounds up and imprisons opponents just as they did. In March 2003, 75 prisoners of conscience (as Amnesty has designated them) were sentenced to prison terms of up to 28 years for peacefully opposing the regime.

In China, while the current environmental crisis turns political, not only is there imprisonment and judicial murder of thousands of dissident human beings, there’s an active trade in their remains, as Lost Budgie has blogged about, and the imprisonment and murders continue. In Cuba, they can kill you, or they can leave you to rot in a dungeon the size of a latrine.

As for Castro, he’s blocking internet use, but of course, it’s all because of the embargo,

Private persons in Cuba cannot legally buy computers or sign up for regular Internet service without government permits that are almost impossible to obtain. . .
. . .
Earlier this month, the France-based organization Reporters Without Borders denounced Cuba as one of a dozen nations with the most controlled and least accessible Internet. It lumped Cuba with Iran and Vietnam.

I guess there won’t be any old Beatles downloads, and that’s probably fine with Sir Paul.

Not that one can afford a lot of downloads on an extra $7 a month if you only were making $15/month to begin with:

Cuba’s Communist Party daily newspaper says that the pay rises will be the first some civil servants have been awarded in 23 years.

Workers with masters degrees will receive a bonus of up to $4 a month. Doctors will get an extra $7.

The raw figures might seem low but in Cuba – where the average monthly salary is around $15, and accommodation healthcare and education are free, the rises will be welcome. Perhaps all the more so because they come at the same time the Cuban government is launching a campaign against those that supplement their salaries through illicit means.

Fidel, of course, has been supplementing his salary to the tune of $3,900,000,000 through the UBS laundering service. I call that “illicit means”, don’t you?

Groovin’ to the oldies
I used to buy the Sunday Star Ledger for three reasons: Roger Harris’s book reviews, Paul Mulshine’s articles, and Prince Valiant (been reading Prince Valiant since early childhood, and I still love it, but I digress).

The Ledger has come up with good articles every so often. But the Star Ledger still manages to come up with nostalgia-focused op-eds, like this gem, The awful truth about Harry by Charles Taylor.

As an aside, just last week a member of the Star Ledger referred to bloggers as “childish and immature”, not knowing that I blog. The best way I could prove him wrong was to totally ignore that remark.

Taylor believes Bush = Valdemort. Obviously he’s been drinking from the same water-cooler as the bushhitler crowd, but I wonder how long it took him to come up with that brainstorm. Still, he claims that

It would be cheap (and, for an American, narcissistic) to reduce the meanings of “Harry Potter” to a political metaphor. (George W. Bush as Voldemort? That’s too easy.)

Not as easy as noticing that the media forgets to use the word “terrorist”, especially if deadly deeds are done by suicidal Islamofacists. Like Voldemort, those words shall not be named.

Taylor says, about the movie HP&tGoF and the book HP6,

what links the two works is that they speak to the emotional tenor of a time when the dominant mood is dread.

To some of us, the dominant mood is defiance, but never mind that. Taylor’s fondly groovin’ to the 1960s soundtrack:

It was a moment like this, a moment when the very notion of good intentions seemed poisoned, that inspired the Rolling Stones to write “Gimme Shelter,” a storm warning of the trial and heartbreak and horror that lay ahead in the era of Vietnam.

But it’s a song from the year before, Fairport Convention’s 1968 “Meet on the Ledge,” I also hear in my head when thinking about where the Harry Potter series is now. The song speaks to the threatened camaraderie of Harry, Hermione and Ron, being an elegy to dreams dashed at an age before one should experience such things. The song speaks of losses already endured (“Too many friends who tried/Blown off this mountain in the wind”) and the promise of reunion tied inextricably to the specter of death (“when the time is up I’m going to see all my friends”).

At the end of “Goblet of Fire” Michael Gambon’s Dumbledore says that what awaits us is the choice between what’s right and what’s easy. Fine words, but words that could be seized on to justify any of the simplifications used to explain our current predicament.

Taylor can’t seem to be able to grasp “any of the simplifications” that, as Hitchens put it,

A globe-spanning war, declared and prosecuted against all Americans, all apostates, all Christians, all secularists, all Jews, all Hindus, and most Shiites,

not simply “our current predicament”, is taking place now, in the 21st century, not 40 years ago.

Update While pondering old songs, Betsy’s Page links to a debunking of old myths about Vietnam, and those who fought. 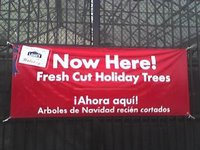 Reminds me of the time at Church last year, where, after Christmas Mass, the priest wished me “Happy Holidays!” I smiled and pointed out “We’re at church. It’s OK to wish people a Merry Christmas!”, and wished her a Merry Christmas, too.

The story starts when Schultze and his two friends Manfred and Jürgen are pushed into early retirement from the salt mines and receive salt lamps as retirement gifts. Schultze spends his retirement days playing the polka on his accordion, gardening (and polishing his garden gnomes), watching his friends fight over chess, riding his bicycle to get around, visiting his mother at the nursing home, and enjoying a beer or two. At the nursing home he meets whiskey-drinking Frau Lorant, who wants him to take her to the casino.

Then he listens to a Zydeco tune on the radio and his life changes completely.

Schultze’s played by Horst Krause, who bears more than a passing resemblance to Curly Howard, if Curly wore eyeglasses and a fedora, and had a deep voice. Not that Shultze is a man of many words.

Director Michael Schorr’s touch is light, slow — and I mean slow –, and makes for a very very funny movie. Schultze is a lucky everyman (I was told once that Schultze is a way to refer to a “generic German” guy, and probably not very complimentary, but have never wanted to find out on my own) who manages to break away from his everyday rutine, and, as Amazon reviewer Donald Liebenson said, “While Schultze’s journey comes to a downbeat conclusion, the film manages to end on a lovely grace note”, that note will make you laugh, too.

Alexander McCall Smith, creator of the delightful The No. 1 Ladies’ Detective Agency series, also uses a light touch, this time in his mild satire of academia, Portuguese Irregular Verbs. This is Smith’s first entry in the academic parody genre, which Kingsley Amis made popular with his 1954 novel Lucky Jim.

Unlike Schultze, the protagonist is a man of many words: 1200 pages’ worth, since Professor Dr. Moritz-Maria von Igelfeld, philology professor, exausted (more like “wore out”) the subject of Portuguese irregular words in his seminal volume, of which only 200 sold. As you can well believe, when it came to the subject of Portuguese irregular verbs, von Igelfeld left “nothing more to be said on the subject. Nothing”. Also unlike Schultze, the Professor is socially inept, and travels a lot. Not an everyman at all, von Igelfeld is acutely aware of his ancestry and longs for aristocratic sports, like fencing.

His travels take him to India, and twice to Italy, where there are echoes of Thomas Mann in the final chapter.

Nowhere near as endearing as Schultze, Professor Dr. Moritz-Maria von Igelfeld stumbles across a near-adventure or two. Schultze follows his new-found passion (low-key as it may be). Schultze is a German guy created and portrayed by Germans. Von Igelfeld is a German academic created by a Zimbabwe-born British academic. The contrast couldn’t be sharper.

In all, Portuguese Irregular Verbs, at 128 pages, is an amusing read for a leisurely afternoon.

The real problem in Latin America is that, with few exceptions, the rule of law — particularly on private property rights — doesn’t exist as we know it.

When the rule of law is weak and there is no respect for private property, efforts to promote free trade — and thereby spur economic growth and reduce poverty — are dubious at best. It is difficult to promote trade and investment in a country whose legal institutions are weak and corrupt; the risks are too great.
The results begin to show. Despite Latin American economic growth rates averaging more than 5 percent in 2004 and similar growth anticipated this year, “capital flows” are negative, meaning more money leaves than enters the region. This is not due to foreign debt but a continued lack of confidence among long-term investors. Not surprisingly, as Latin America expert Andres Oppenheimer has noted, “only 1 percent of the world’s investment in research and development currently goes to Latin America.”
If economic progress is the goal, the U.S. government and multilateral institutions like the World Bank need to push the region to take legal reform seriously. Every country in the region needs a legal system and regulatory environment that defines and protects property rights.

The institutions for such an environment simply aren’t there.

I recommend that you read not only the article, but Hernando de Soto’s and Alvaro Vargas Llosa’s books on the subject: