Shoe blogging: The Pope’s, and Judi Werthein’s
As any reader of The Manolo knows, the Pope, he wears the Prada for the traditional red papal shoes.

I for one congratulate the Pope on his good taste. I wonder if he gets them for free. 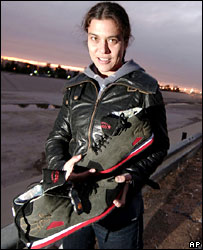 Barbara Simpson looks at Judi Werthein’s shoes and asks, Who’s stupid now? (article via Maria). Werthein gets shoes that were made in China for $17 a pair, and sells them in chic boutiques for $215 a pair, in the true spirit of capitalism. Since the shoes also have a compass, a flashlight, a map, and some Tylenol, she’s giving them away for free to illegal aliens soon to attempt the “brinco”, which the BC defines as

They call the act of crossing the “brinco” – literally “jump” in Spanish.

According to the Beeb, State-of-the-art shoes aid migrants. Barbara Simpson wants to know,

It makes you wonder why, if they have such compassion for poor Mexicans, they didn’t have the shoes made in a Mexican factory? Then again, where is their compassion for the slave labor in Chinese factories?

I wonder if Werthein’ll come up with sneakers for NJ commuters, with room for a train ticket, a lipstick (can’t go anywhere without red lipstick!), a train schedule, and a map of NY subways printed on the innersole, along with the Tylenol for those train delays.

Today’s related headlines on the Pope, and on illegal aliens: Pope seeks solution to misery in Darfur
Bush Pushes For Changes On Immigration