Venezuela branches out, big time
This study (via Riehl World View, see prior post) points out to Venezuela’s long-term involvement in narcoterrorism:

Venezuela, and its neighboring island, Aruba, have long had a well established drug trafficking, drug smuggling, and money laundering network, which had been created in the early 70s by the Cosa Nostra’s Cuntrera-Caruana family.

In the 1990s, the Aruba-based Mansur family, of Lebanese descent, took over the
network, adding cigarette smuggling to their operations. According to U.S. court documents from March 2001,“Much of the proceeds garnered by the Mansur brothers went to Hizballah.”

The Colombian free trade zone city, Maicao, which borders Venezuela, has a large Shiite community, and is a known “vacation spot” for Islamist groups. According to an U.S. Intelligence source, “Cells of the radical group Hizballah control 70% of the local commerce.”In addition, “the merchants from there make contributions equivalent to 10% and up to 30 % of their profits.
Those responsible for the fund send the money via banks in Maracaibo, Venezuela and Panama.

All the same, Chávez is keeping busy with foreign dignataries that came asking for a bigger hand-out (link in Spanish), changing the flag and shield of the country, funding Bolivarian Circles in the USA, hiring Bobby Kennedy’s son Joe, and saying he’s going to help the American poor, who, by the way, have higher per-capita income than the Venezuelan middle class.

That’s when he’s not calling people names. But Captain Marlow has the cartoon, 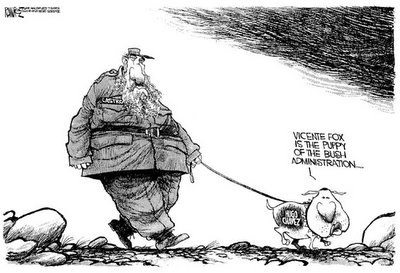 Of course, imperialism is to blame for it all.