Hugo vs. Vicente, 2a parte 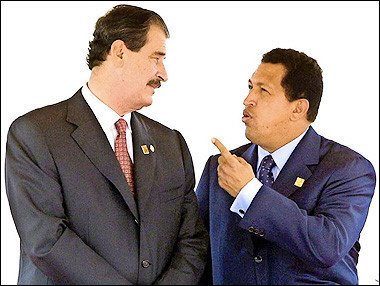 Venezuela — Venezuela and Mexico called their ambassadors home in a sharp dispute between presidents Hugo Chavez and Vicente Fox over the latter’s relations with Washington.

As Gateway Pundit points out,

Hugo was hoping to become the great statesman who stood up to the American Empire. Sadly, it did not turn out that way as most of the countries do not favor Marxism and 29 out of 34 wanted to continue talking about opening markets to free trade.

There’s more to the story than an ego battle and free trade, though,

Threatening to further inflame tensions, Mexican prosecutors late Monday said they have detected a large upswing in heroin shipments entering the country from Venezuela, and suggested corrupt Venezuelan airport workers may be letting the drugs through.

But then, Captain Marlow had already brought up the subject.

Venezuela News and Views sees all this as

A presidential temper tantrum that will cost dearly to the country is the chosen excuse to distract folks.

Especially since the invasion hasn’t materialized yet.