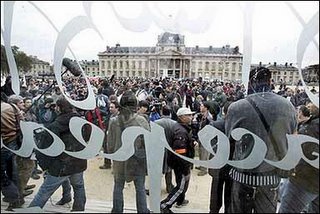 After 16 consecutive days of arson and riots, and an additional 500 cars set on fire last night, a small number of demonstrators (some 300 people) from the Banlieus Respects association gathered in Paris at the Peace Monument (le Mur de la Paix du Champs-de-Mars) near the Eiffel Tower and flew small white flags while demanding Sarkozy’s resignation.

You can see for yourself if you watch the BBC video here, 1:12 into the video. Le Monde has a slide show

French police are fed up at being scapegoats (link in French via ¡No Pasarán!).
Denis Boyles predicts,

Iowahawk has the musical.