Venezuelan flags
Daniel of Venezuela News and Views took this beautiful photo in the first big opposition march of 2003: 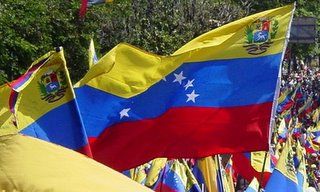 Well, who’s using the photo but a web page called An Evening of Solidarity with Bolivarian Venezuela in New York City (if you must, Daniel has a link)

Yes, that is right, the picture used by that pro-Chavez call to fundraising is actually a picture taken form a march that gathered at least 100 000 people bitching at Chavez. Now, that IS egg on your face for the organizers of the event, people that were unable to find pro Chavez flags among so many multi million marches that chavismo has claimed. How come, guys?

I’m not much for symblism, but this speaks for itself.