7th night of rioting in France 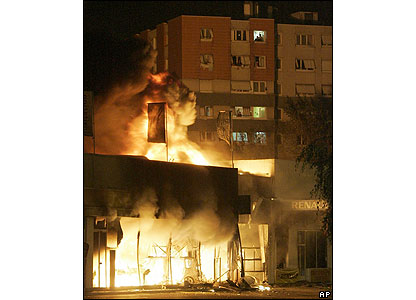 Rioting youths opened fire on police and set dozens of vehicles ablaze in a seventh night of violence in Paris.
Two live rounds were fired in the town of La Corneueve, and fire fighters in Saint Denis and Noisy-le-Sec were also shot at, a senior local official said.

Two primary schools, a post office and a shopping centre were damaged and a large car showroom set ablaze in the flashpoint town of Aulnay-sous-Bois.
. . .
Speaking in France’s National Assembly, he [Sarkozy] said tough law and order policies were not to blame for the violence.

“I am convinced that a number of acts of urban violence would never have occurred in our country if so many hoodlums had not thought that one could burn one’s neighbour’s car with impunity,” Mr Sarkozy said.

President Jacques Chirac has also called for calm and respect.

Three years ago, Theodore Dalrymple, in his article, The Barbarians at the Gates of Paris wrote (emphasis mine)
(hat tip: Roger L. Simon’s commenter Gideon7),

The state, while concerning itself with the details of their housing, their education, their medical care, and the payment of subsidies for them to do nothing, abrogates its responsibility completely in the one area in which the state’s responsibility is absolutely inalienable: law and order. In order to placate, or at least not to inflame, disaffected youth, the ministry of the interior has instructed the police to tread softly (that is to say, virtually not at all, except by occasional raiding parties when inaction is impossible) in the more than 800 zones sensibles—sensitive areas—that surround French cities and that are known collectively as la Zone.

But human society, like nature, abhors a vacuum, and so authority of a kind, with its own set of values, occupies the space where law and order should be—the authority and brutal values of psychopathic criminals and drug dealers. The absence of a real economy and of law means, in practice, an economy and an informal legal system based on theft and drug-trafficking. In Les Tarterets, for example, I observed two dealers openly distributing drugs and collecting money while driving around in their highly conspicuous BMW convertible, clearly the monarchs of all they surveyed. Both of northwest African descent, one wore a scarlet baseball cap backward, while the other had dyed blond hair, contrasting dramatically with his complexion. Their faces were as immobile as those of potentates receiving tribute from conquered tribes. They drove everywhere at maximum speed in low gear and high noise: they could hardly have drawn more attention to themselves if they tried. They didn’t fear the law: rather, the law feared them.
. . .
But among the third of the population of the cités that is of North African Muslim descent, there is an option that the French, and not only the French, fear. For imagine yourself a youth in Les Tarterets or Les Musiciens, intellectually alert but not well educated, believing yourself to be despised because of your origins by the larger society that you were born into, permanently condemned to unemployment by the system that contemptuously feeds and clothes you, and surrounded by a contemptible nihilistic culture of despair, violence, and crime. Is it not possible that you would seek a doctrine that would simultaneously explain your predicament, justify your wrath, point the way toward your revenge, and guarantee your salvation, especially if you were imprisoned? Would you not seek a “worthwhile” direction for the energy, hatred, and violence seething within you, a direction that would enable you to do evil in the name of ultimate good? It would require only a relatively few of like mind to cause havoc. Islamist proselytism flourishes in the prisons of France (where 60 percent of the inmates are of immigrant origin), as it does in British prisons; and it takes only a handful of Zacharias Moussaouis to start a conflagration.

More at the International Herald Tribune.

Brussels Journal has a post on other Ramadan Rioting in Europe’s No-Go Areas.

Why does it have to be an “either/or” situation? Can’t they work on economic opportunities for the poor and crack down on rioting at the same time? And does the Equal Opportunities Minister have a clue about how France’s restrictive economic policies are harming those at the bottom and adding to unemployment in his country?