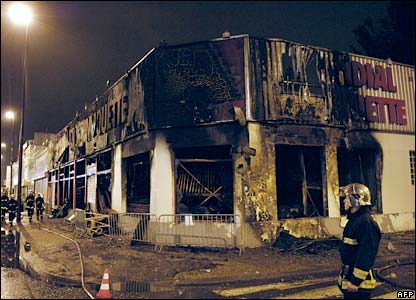 Rioting has spread to more suburbs of Paris on a sixth night of unrest in the north-east of the French capital.
Suburban unrest spreads in France

Tension had mounted throughout Tuesday after young men torched cars, garbage bins and even a primary school 24 hours earlier.

France2 news showed several residents of Clichy-sous-Bois attempting to calm down some of their neighbors earlier in the evening, but the unrest spread to at least nine other towns.

Update Sigmund, Carl and Alfred bring to my attention this post at Viking Observer, War in France, War in Denmark:

Not that well covered is a very similar series of riots, also running for four days, in Århus, Denmark.
. . .
Rosenhøj Mall has several nights in a row been the scene of the worst riots in Århus for years. “This area belongs to us”, the youths proclaim. Sunday evening saw a new arson attack.

Their words sound like a clear declaration of war on the Danish society. Police must stay out. The area belongs to immigrants.