He also has positive Proof that Warren Buffet is the smartest life form on the planet.

If you thought it was only the Iranian president
watch this MEMRI video of a sermon.

Marc Rich at The Bad Hair Blog, slightly ahead of . . . Paul Volker? 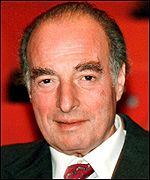 Here at TBHB, Maria and I have found articles on subjects that surface several months later. Take, for instance, Marc Rich. Last December I did these three posts on Rich’s involvement in the Oil-For-Food UNScam.

Now the last installment of the Volker report spells it out for us:

“Surcharges were imposed on the oil,” the report said, and “Marc Rich & Co. directed BNP Paris not to disclose its identity to BNP NY in connection with its financing of the U.N. contract.”

The company responded that it “continues to dispute vigorously” the report’s conclusion.

The dealings were done through French bank BNP, and as The Telegraph points, out,

France’s relationship with Saddam dated back to the mid-1970s when Jacques Chirac, the then prime minister, visited Baghdad. Between 1974 and 1990, more than 20 French ministers from all the main parties travelled to Iraq to expand France’s commercial interests, which ranged from construction to armaments and a nuclear reactor that the Israelis promptly bombed.

The NYT titles its article The Many Streams That Fed the River of Graft to Hussein, or as I said last December, Rich flows the Don. Carmelo Jordá (in Spanish) has a better title: Encontradas las Armas de Corrupción Masiva (Weapons of Mass Corruption Found).

At the time of the pardon, many people puzzled over why Bill Clinton would pardon a man who fled the country and whose status as a fugitive had been under negotiation with the FBI just prior to Clinton’s action. Instead of cutting a deal with Rich to get him back to the US to face charges, Clinton pulled the rug out from under the FBI. Without the leverage of the charges, Rich had no further motivation to cooperate with the DoJ on any outstanding investigations.

At the time, the presumption was that Rich’s wife had donated enough money to buy the pardon. Now, however, the question may be whether Clinton knew about the corruption and feared that an aggressive Bush administration policy would uncover Rich’s participation in undermining Iraqi sanctions while Rich raised funds for both his presidential library and Hillary’s election. Or maybe the issue runs even deeper than that?

As if all these news items weren’t enough for subjects that surface months later, one of Rich’s former lawyers is presently very much in the news today. ..
Update . . . and is now unemployed

Cuba has accepted a US offer to send a disaster team to help with Hurricane Wilma – the first time in decades that Cuba has said yes to such an offer.

The Beeb fails to mention that prescription medications and food are not included in the embargo, but never mind that.

I’m not alone in finding this to be a very interesting development.

Iran’s long-term policy comes to the fore
(note: all bold print and caps were used exactly as in the original articles)
Iran leader defends Israel remark
Iran defends its president’s call for Israel to be “wiped off the map”, saying this has long been official policy

Iran’s president has defended his widely criticised call for Israel to be “wiped off the map”.

While the Beeb’s article says

Egypt said they showed “the weakness of the Iranian government”. A Palestinian official also rejected the remarks.

Al-Jazeera’s got a different story,

Iran’s anti-Israel remarks: Arabs mum
Arab governments have maintained silence over the call by Iran’s new president for Israel to be wiped off the map.

Newspapers across the Middle East reported Wednesday’s speech by President Mahmoud Ahmadinejad without comment, many of them on their front pages.

Egyptian Foreign Ministry and cabinet officials said Cairo would have nothing to say on the address.
. . .
With so many conflicts in the Middle East, “the region is in a mess. We really don’t need one more”, said one official on condition of anonymity, hoping the issue would go away.

It’s not the only instance where the Arabs are staying mum (link in Spanish, via Hispalibertas).

The Europeans still cling to their hopes for negotiations, though last month they finally joined the Bush administration’s long-standing — and equally futile — attempt to refer Iran’s violations of the nuclear Non-Proliferation Treaty to the U.N. Security Council. But the crudeness of Mr. Ahmadinejad, and his already evident failure to deliver on his populist promises to raise Iranian living standards, ought to open the way to a different approach. Unlike their president, most young Iranians would like to live in a prosperous and democratic society that enjoys good relations with the West. The West should stand up for that Iran; it can do so by rejecting and isolating the hateful ideologue who would drag the country in the opposite direction.

Via Gail, Tony Blair was emphatic, Blair in threat to Iran

FURIOUS Tony Blair last night warned Britain and America are ready to take military action to stop Iran getting nukes.
He expressed “revulsion” over Iranian President Ahmadinejad’s threat to wipe Israel off the face of the earth and branded Tehran a “real threat to world security and stability”.

The PM was visibly angry as he warned the ayatollahs not to assume the world is too tied up in Iraq to deal with Iran.

“This is a disgrace,” he said after a one-day EU summit in London’s Hampton Court Palace.

“I am aware that I have not said what we are going to do. This is a discussion we will be having with our allies over the next few days.”

But the PM warned the issue now facing the West is no longer IF but WHEN to strike.

Just last month The Economist was asking, WHY is the pressure suddenly seeming to leak out of the diplomacy to persuade Iran to end its nuclear dabbling—just when the regime is flaunting its defiance?

Update Captain Marlow appraises the situation.
Update 2 “Westerners are free to comment, but their reactions are invalid.”

Is the Anchoress right?
US top court nominee steps down
Miers Withdraws Under Mounting Criticism

On October 3, The Anchoress posted,

I knew Bush would pick Miers because he is the master of the rope-a-dope. AND…(and here I know I am going to be very unpopular) I disagree with the hysterics coming from the right, today. But I understand that they are a necessary part of his roping and doping.

People who think they know how W plays assumed that Miers’ name was thrown out there as a bit of misdirection, to keep folks from figuring out if Janice Rogers Brown and Alberto Gonzales were actually duking it out in the WH garage.

But anyone who really watches W knew that he put Miers name out there because despite all of the nonsense in the press about how unforthcoming, sneaky, underhanded and skullduggerish the Bushies are, he actually – quite frequently – hides in plain sight.
. . .
My own prediction: She may not make it to the Supreme Court. Bush may not even intend for her to get there. She may be, rather than the “misdirection,” many expected, an out-and-out decoy, floated to allow both the liberals and the conservatives to blast her out of the water so that Bush can then put up another candidate that both left and right – after having behaved very badly over Miers – will not dare to behave badly over, again.

So far, The Anchoress is right.

More than 4,500 companies took part in the United Nations oil-for-food program and more than half of them paid illegal surcharges and kickbacks to Saddam Hussein, according to the independent committee investigating the program.

The country with the most companies involved in the program was Russia, followed by France, the committee says in a report to be released Thursday.

What next might turn up in the IHC saga depends on a number of investigations. But in an era when many authorities are worried about the transit of millions across borders and the enforcement of good governance, it appears the U.N. has been serving as a bazaar in which corruption, conflicts of interest and shadowy financial networks have found ways to set up shop. Behind the maze, who was the real owner of IHC during its nine years of doing big business with the U.N.? The U.N. won’t say, and quite possibly does not even know. Its policy, in fact, was not even to ask.

Talking to Miami, while listening to CNN
I was listening to CNN yesterday afternoon and became rather alarmed. After Wilma, wait frustrates Floridians. Residents line up for supplies; U.S. death toll doubles to 10

Meanwhile, residents in several cities again formed long lines Wednesday to get basic necessities, such as gasoline, water, ice and food. In some sites, supplies ran out.
. . .
Many of those in line still had about half a tank of gas but were determined to fill up in case of fuel shortages.

I checked on some of the Florida bloggers: at Babalu, Val’s running out of gas for his generator, George needs a new roof, but Robert already has electricity. Steve doesn’t have electricity, but has beer.

I turned down the volume on the TV and called the Florida relatives.

The relatives weren’t home so I tried their work numbers, and yes, they’re are back at work — their buildings have generators. The temps have been mild, so they’re not complaining. They had filled the cars’ gas tanks and bought gas for the grill well before the storm hit. Schools are closed but they got together so their kids are staying with a supervising grown-up. Their houses had minimal damage. They have running water (not heated, obviously). There was no flooding where they live.

Called other friends in FL. Situation same as the relatives’. One has electricity at home already.

Then I called Mom. I had already talked to her on Tuesday, but called yesterday anyway. Mom’s doing great, has no electricity at her house, but is comfortable without air-conditioning and was just about to call for takeout when I rang.

I turned off the TV.