MoDo’s in the Sunday Mag 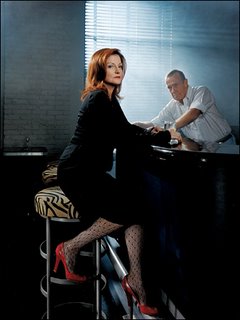 with her article, What’s a Modern Girl to Do? (Note to MoDo: You’re a woman, not a girl.) Anne Althouse and Roger L. Simon have plenty of people commenting. The Anchoress replies to MoDo’s question.
Drudge has a captions contest.

I’d suggest a slight makeover. The photo shows MoDo wearing black, except for some Really Big Shoews (as Ed Sullivan would say), on a Red Shoe Diaries mode. I don’t know what The Manolo would say, but a softer blouse, sheer Ann Taylor hose in natural, and less clunky shoes would make her look better.

If she’s seriously considering marriage, the first thing, however, would be to LEAVE THE BAR. One doesn’t look for a husband in bars.

Back at the Sunday Mag, MoDo again bellyaches about why men don’t want to marry her.

Last February the NYT published on the day-before-Valentine’s Day a column (available here) listing the kinds of books she’d present a guy “that would help him better understand me”, and listed some gems such as, “Be Honest – You’re Not That Into Him Either”, “Empty Promises,”

(which is certainly one that’d get the average Joe to think about marriage, only not in a positive way) and, most unforgiveable of all, Deepak Chopra’s cookbook.

The one book that got mentioned in both articles was her Mom’s recommendation, “365 Ways to Cook Hamburger and Other Ground Meats”. One can surmise that this particular tome is something of an issue in that mother-daughter relationship.

My advice last February was,

1. Any guy that reads your column will get a really good idea of what you’re like. Any guy who doesn’t want to read it doesn’t deserve you.
2. Any reading list that includes Deepak Chopra’s cookbook says “S-T-A-Y A-W-A-Y F-R-O-M M-E”.

I stand by my words.

I know, more flattering clothes and staying away from telling men what to read won’t get her a husband IF she won’t drop the sarcasm, but it’d be a start.

Update: SC&A explain, That in fact, is the greatest of destinies- to transform and make better, those around you.