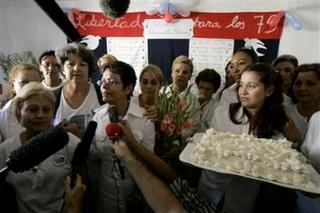 The Ladies in White are the wives and supporters of 75 political prisoners held by Fidel Castro’s government. The detainees are serving prison terms ranging from six to 28 years. The European Union says the dissidents must be freed if Cuba is to have better relations with Europe. Among those held are journalists, intellectuals, religious activists and members of dissident political groups.

The European Parliament awarded the Sakharov Prize for Freedom of Thought yesterday:

The prize committee recognized two organizations for their work: Reporters Without Borders, an international non-government organization defending journalists and the freedom of the press, and Cuba’s Women in White movement, which comprises wives and family members of dissidents imprisoned under Fidel Castro. In addition, Nigerian lawyer Hauwa Ibrahim, who came to the world’s attention for defending local women sentenced to be stoned to death for adultery, was also honored.

The Ladies in White have been holding a weekly march the last two years to protest the Cuban government’s jailing of their activist husbands.

Their husbands are still imprisoned.

“For Canadians, Cuba is a tourist paradise. But for Cubans, it is like a big jail”.