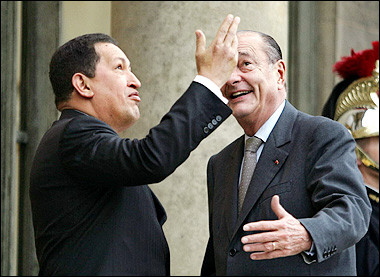 “They decided to set up an organised mechanism for dialogue to further develop economic and industrial cooperation between the two countries,” he added.

It was the third time the two had met this year.

French oil giant Total has a strong presence in Venezuela and could double its output from 200,000 to 400,000 barrels a day after several billion dollars were invested, Chavez said in Paris in March.

The French Economic Crime Squad has been investigating claims of pay-offs to prominent French officials and business figures, as part of a wider probe into the activities of the French oil giant, Total. Apart from Merimee, those under scrutiny include Patrick Maugein, a businessman close to President Jacques Chirac; former head of the Foreign Ministry Serge Boidevaix; former interior minister Charles Pasqua; and head of the Franco-Iraqi Friendship Association, Gilles Munier.
. . .
Quite apart from allegations of illicit backroom dealings, France accounted for approximately 25 per cent of all UN-approved trade with Saddam’s Iraq. Moreover, as early as 1993, Total had secured exploration rights over southern Iraq, including the vast wetlands drained by Saddam in his vicious campaign against the Marsh Arabs. Even at prewar oil prices of $US25 a barrel, these contracts might ultimately have been worth a massive $US650 billion. The deal was approved by Saddam.

I guess this time Jacques skipped a middleman.

Update, via ¡No Pasarán!, “Donnez-nous la recette pour gagner sept fois de suite les élections”, which means, Give us the recipe for winning elections seven times in a row.
For that, they’re going to need Jimmy Carter‘s help.