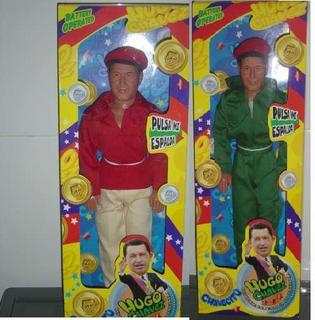 Propaganda toys
Via Babalu Blog, the Hugo Chavez doll is now available. As the Edmonton Sun said, We’re assuming the “Jungle Re-Education Camp” playset is extra, but I’m wondering if it’ll be displayed on the same shelf as the Hijab Barbie.

Hugo’s having more success in his whirlwind tour of Europe than he had in in New York last month, when Kofi Annan sent him to a corner and put him on a time-out, causing Hugo to miss his appointment at Columbia U.

Hugo’s been praising and hugging Mugabe, at the 60th anniversary celebrations of the United Nation’s Food and Agriculture Organisation in Rome. It just had to be a UN celebration. As readers of this blog know, I have predicted that Mugabe, who said he’ll be retiring in 2008, will be moving to either Cuba or Venezuela. After Rome, it’s Paris for Hugo, where the BBC healines him as Hugo Chavez: Charming provocateur, praising him since

He first won election in 1998 and has since spent countless millions of dollars on developing social welfare programmes to bring clinics and schools to where before there were none.

The Beeb has no mention of how he’s been driving his own country to ruin. Here’s a table from a prior post that bears repeating:

Of course, the BBC isn’t paying much attention to the food crisis in Zimbabwe, since Mugabe was cheered by the U.N. delegates but Hugo, all the same, is telling the press that the African leader had been “demonized” and that Venezuela was enacting similar reforms to undo “the unfair structures of colonialism.”

Hugo go ended the interview by saying “he must go to pay his respects to President Chirac.”

Too bad fidel wasn’t there to join in the dance,

Speaking of castro, (via Hispalibertas), apparently gas station attendants were cheating El Comandante out of gas by stealing gasoline and selling it on the black market, so he’s replaced them with volunteer social workers that keep written records of how much each car purchases, and the car’s license plate.
(No, I don’t know why social workers. Maybe they’re just workers that are sociable.)
The volunteers wear t-shirts that read “Más humanos, más cubanos” (“more humans, more Cubans”, catchy, isn’t it?). As the headline of El País explains,

I believe it’ll take more than that to end corruption.

In a rare fit of generosity, fidel raised the minimum salary from $5 to $10 A MONTH just this year. You could say the whole country’s “volunteering”. Except for one.