The I word: Lord Voldemort has a name
Mark Steyn:

Ah, “Islamic militants.” So that’s what the rebels were insurging over. In the geopolitical Hogwart’s, Islamic “militants” are the new Voldemort, the enemy whose name it’s best never to utter. In fairness to the New York Times, they did use the I-word in paragraph seven. And Agence France Presse got around to mentioning Islam in paragraph 22. And NPR’s “All Things Considered” had one of those bland interviews between one of its unperturbable anchorettes and some Russian geopolitical academic type in which they chitchatted through every conceivable aspect of the situation and finally got around to kinda sorta revealing the identity of the perpetrators in the very last word of the geopolitical expert’s very last sentence.

Chechen warlord Shamil Basayev has claimed last week’s attack on the Russian city of Nalchik and blamed heavy militant losses on a leak.
. . .
Basayev, who claimed the attack on the Beslan school last year as well as a string of other deadly raids, said the Nalchik operation had been a “great success because our dead are in Paradise and theirs in Hell”. 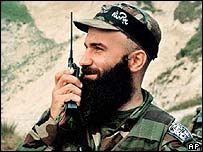 As Mark Steyn points out,

Yet, within their present territory, there remain a few exceptions to the grim statistics cited above, parts of Russia that retain healthy fertility rates and healthy mortality rates. And guess what? They’re the Muslim parts. Or, as the New York Times/NPR/Agence France Presse/Scotsman/Toronto Globe & Mail would say, they’re the insurgent rebel militant parts. Many of these Russian Muslim areas — like Bashkortistan (and no, I didn’t make that up, it’s a real stan. Check it out in the World Book Of Stans) — are also rich in natural resources.

If you’re an energy-rich Muslim republic, what’s the point of going down the express garbage chute of history with the Russian Federation? The Islamification of significant parts of present-day Russia is going to be a critical factor in its death spiral.

Dr. Sanity posts on The Holy Nuclear Weapon of Jihad

On a related subject, Theodore Dalrymple explains The Meaning of Beheading ,

You don’t have to be a follower of Jung to discern something deeply symbolic in these beheadings by self-appointed executioners. To sever the head from the body, at least nowadays when we have a more refined sensibility, is not merely to kill: It is symbolically to annihilate not only the biological existence of the beheaded, but the very thoughts he has had during his lifetime. To throw away a head as if it were a worthless inanimate object is to deny in the most categorical way possible any ideas that it might have had while living. It is to imply that only correct thoughts can henceforth be allowed to exist in heads, the kind of thoughts that the executioners themselves have; not until there is unanimity in thoughts, they imply, will our heads rest easy on our shoulders.

But not to worry. Ban Piglet, erase Saint George, and keep making sure the toilets don’t face Mecca.

Just don’t use the “I” word, and all will be fine.