Meet the new James Bond
I would have preferred this guy: 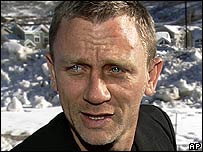 On the other hand, let’s hope this version of Casino Royale is better than the first one.

Update: The good news is: turns out Clive O. was asking for contract points

According to a report by entertainment trade Variety correspondent Michael Fleming, producers Barbara Broccoli and Michael G. Wilson lost the chance to have Academy Award-nominated actor Clive Owen (41) assume the title role in the James Bond film empire when they refused to include gross profit points for the actor’s contract. Gross profit point sharing is a common consideration given to marquee actor

The bad news is that he’s in Steve Martin‘s Pink Panther movie. While I love these 2 guys, I just can’t muster enthusiasm over Pink Panther remakes.

Either way, I hope Clive O. gets contract points in everything he does.