Hundreds of sets, props and models were lost yesterday morning when a fire gutted a warehouse storing Aardman Animations’ archives in Bristol, England.

More at The Guardian

Experts agreed the fire was a blow for the British animation industry, which has undergone a renaissance since the mid-80s. Jayne Pilling, director of the British Animation Awards, said: “To have lost this material is a tragedy, especially as one of the wonderful things about Aardman was that they were so meticulous in archiving their material.” Brian Sibley, who has written a book on the history of 3D animation with Peter Lord, one of the founders of Aardman, said: “The sets for the Wallace and Gromit films are pieces of art, even when they are not animated, because they are so beautifully made. It’s very sad to think that they are destroyed.” 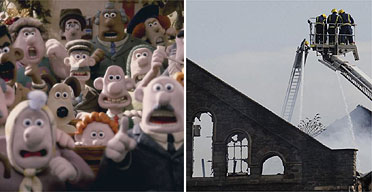 At least it wasn’t a total loss since many sets were at different locations.