Scott is back!
Fans of the Daily Ablution have reason to rejoice. Scott’s been back for a week now, and today he’s got the lowdown on how the Cocaine-Fuelled Bush-Bashing Competition Heats Up. Remember last week’s story — which turns out to be a two-year old story, btw — on how Bush “talked to God”? It came out supposedly from an upcoming BBC series on the Middle East. 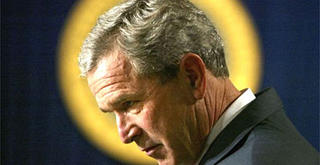 Palestinian leader Mahmoud Abbas, (certainly a neo-con bona-fide member of The Vast Right-Wing Conspiracy) who was at the meeting where Bush supposedly said that, insists that

“This report is not true,” the Abbas statement said today. “I have never heard President Bush talking about religion as a reason behind the wars in Iraq and Afghanistan. President Bush has never mentioned that in front of me on any occasion and specifically not during my visit in 2003.”

The Beeb’s original press release got changed and Daimnation! has the story of that meme in the making (via Biased BBC).

Scott, however, catches The Independent’s Paul Valery in a “fake but accurate” moment:

And, of course, for much of the left – to whom actual facts are unimportant when compared to the bias and preconception that shapes the bien-pensant worldview – it hardly matters if the story is factual, or merely the hysterically overblown reporting of a single source’s anecdote by publications with overt agendas.

After revealing his inability to write grammatically (“… he was told by God – whom [sic], we learned, calls the president …”), the Independent’s Paul Vallely demonstrates this frequently encountered mindset beautifully (pay-to-read link omitted):

“In one sense, however, it doesn’t matter what he actually said. What is alarming enough is that it is the kind of thing he would say.”

Or, putting it slightly differently, it doesn’t matter what’s actually true – it’s what we “opinion formers” in the media think should be true, and insist that you believe.