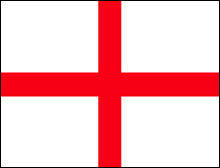 Belief is well and truly beggared. What we see here is a conflation of the marginalisation of Englishness in the UK through this government’s approach to devolution and sheer wrongheadedness. The Chief Inspector of Prisons says that “Prison officers should be neutral” and thus English prison officers are not permitted to wear the flag of their country – which, in the majority of cases, is also the country flag of the prisoners themselves. And all this at the behest of those who,, being imprisoned for criminal offences, have precious little right to complain. It is worth noting that, across America and Europe, prisons are becoming hotbeds of radical Islam and it is worth conjecturing that at least some of the Arab or Muslim prisoners involved have ties to an extremist ideology that will not be satisfied with anything less than our total destruction. Why on earth should we even contemplate appeasement of same on the home front, when the present government has shown such resolve in countering it abroad?

The Anti-Idiotarian Rottweiler pulls no punches.

For Rahman instead to equate a British capitulation to Muslim sensibilities with tolerance indicates that he has confused Islamic supremacism with tolerance. This is perhaps not surprising given the near-universal tendency among Muslims and non-Muslims alike to laud Medieval Muslim Spain as a proto-multiculturalist paradise of tolerance, when actually it was a paradise for Islamic supremacists. Christians and Jews lived in harmony with Muslims only as inferiors. Historian Kenneth Baxter Wolf notes that the after the Muslim conquest, the conquerors imposed new laws “aimed at limiting those aspects of the Christian cult which seemed to compromise the dominant position of Islam.” After enumerating a standard list of the laws restricting non-Muslims (dhimmis) — no building of new churches, no holding authority over Muslims, distinctive clothing, etc. — he adds: “Aside from such cultic restrictions most of the laws were simply designed to underscore the position of the dimmîs as second-class citizens.”

Multiculturalism? Tolerance? Not by any modern standard. And neither are the disappearing pigs of Great Britain.