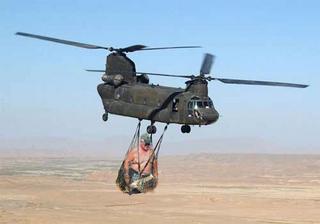 Shocked by the widespread suffering of those displaced from their homes by the flooding in New Orleans
following Hurricane Katrina, Senator Edward Kennedy (D-Mass.) offered to plug one of the holes in the
Lake Pontchartrain levee with his own ample body.
“The Bush Administration has failed to stem the tide of this cataclysm,” said Kennedy.
“I have had some experience with aquatic mishaps. This experience will bolster me in this hour of desperation as I plug one of the leaks myself.”

Kennedy has arranged to have the Air Force transport him by helicopter and lower him into the easternmost breach in the levee.
The hope is that the senator’s doughy frame will be pliable enough to conform to the hole’s dimensions and halt or, at least slow,
the flow of water from the lake into the city.
President Bush praised Senator Kennedy’s decision. “I think it’s mighty big of him to offer so much for the good of the country,” said Bush.
“There aren’t many who could fill such a large role in this disaster.”

If you want to know who really gets most federal loot, keep a properly cynical eye out for such warnings as, “Lobbies Line Up for Relief Riches.”