What does the above titles have in common? A West Yorkshire head teacher has banned books containing stories about pigs from the classroom in case they offend Muslim children.

Lost Budgie posts on the matter:

Politicians in West Midlands banned the display of toy pigs and other pig-related items in municipal offices as a result of a single complaint from a Muslim. Among the banned items were piggy banks, novelty pig calendars and a tissue box featuring Winnie the Pooh and Piglet.
. . .
This latest incident is just part of an ongoing initiative by some Muslims to force British society to conform to Islamic standards. Declaring the images of pigs to be offensive and anti-Muslim is the tactic of the day – and it appears to be coming along very well.

I happen to have handy (imagine that!) the 100th anniversary of George Orwell’s birth edition of Animal Farm and 1984, which has an introduction by Christopher Hitchens (imagine that, too!) where he says, on page VII:

In a less distant past, these books used to be banned in every country under Communist rule, and are still occasionally suppresed in the remaining single-party despotisms that disfigure the globe as I write, while Animal Farm is sometimes forbidden reading in the Islamic world

and now in England,

— because of its focus on pigs.

Having been among the bullies and among the bullied at different times of his life, Orwell had an innate understanding of what Nietzsche called the “master-slave” relationship. He knew that there are guilty thrills to be obtained from domination, and he also realized what few people fully appreciate — that there are also guilty thrills to be had from subjecting and abasing oneself. These books can be read, independently of their time and place, as a strong preventive medicine against the mentality of servility, and especially against the lethal temptation to exchange freedom for security: a bargain that inevitably ends up with the surrender of both

As you can see, I have changed the bookshelf to include a list of pig-related books and toys. I start with Olivia, prima donna of all piglets, with both Olivia Saves the Circus Book and toy, include the charming Kipper’s Christmas Eve, which he celebrates with his friend Pig (*), and not to be missed, Hitchens’s own Why Orwell Matters.

No guilty thrills here, no subjecting and abasing oneself, just good reading.

Update The Brits are self-censoring artworks that “could upset Muslims”, too: Tate ‘misunderstood’ banned work

Tate Britain “misunderstood” a piece of art it took out of a show to avoid religious offence, its creator said.
The gallery cancelled plans to display John Latham’s God Is Great, concerned in particular that it could upset Muslims after London’s 7 July bombings.

Latham was angered by the decision and said that the work, made 10 years ago, was “not offensive to anybody”.

Here is the art removed by the Tate: 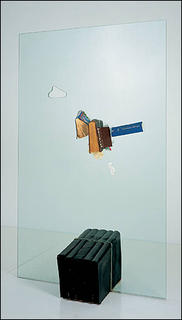 Notice how it is about books.

Update 2 (*) Kipper makes the list, not only because of the books and DVDs characteristic charm, but because
1. Dogs are considered as unclean as pigs
2. Kipper’s friend is a pig
3. They are celebrating Christmas.
I call that a trifecta.