The cable news outdid themselves with story after story of “hundreds of dead” at the Superdome, only to find the Rumors of deaths greatly exaggerated

Following days of internationally reported killings, rapes and gang violence inside the Dome, the doctor from FEMA – Beron doesn’t remember his name – came prepared for a grisly scene: He brought a refrigerated 18-wheeler and three doctors to process bodies.

“I’ve got a report of 200 bodies in the Dome,” Beron recalls the doctor saying.

Of those, four died of natural causes, one overdosed and another jumped to his death in an apparent suicide, said Beron, who personally oversaw the turning over of bodies from a Dome freezer, where they lay atop melting bags of ice. State health department officials in charge of body recovery put the official death count at the Dome at 10, but Beron said the other four bodies were found in the street near the Dome, not inside it. Both sources said no one had been killed inside.

At the Ernest N. Morial Convention Center, just four bodies were recovered, despites reports of corpses piled inside the building. Only one of the dead appeared to have been slain, said health and law enforcement officials.

That the nation’s front-line emergency management believed the body count would resemble that of a bloody battle in a war is but one of scores of examples of myths about the Dome and the Convention Center treated as fact by evacuees, the media and even some of New Orleans’ top officials, including the mayor and police superintendent. As the fog of warlike conditions in Hurricane Katrina’s aftermath has cleared, the vast majority of reported atrocities committed by evacuees have turned out to be false, or at least unsupported by any evidence, according to key military, law enforcement, medical and civilian officials in positions to know.

On lighter news, there’s a new movie coming out called “Inside the Bubble,” about which Lloyd Grove says,

I hear that John Kerry loyalists are kicking themselves for cooperating last year with filmmaker Steve Rosenbaum on “Inside the Bubble,” a potentially devastating behind-the-scenes look at the Massachusetts senator’s failed presidential campaign.
I’m also told that Hillary Clinton partisans are licking their chops to see the film, which “could end up being the silver bullet that kills Kerry’s presidential chances for 2008,” says a Lowdown spy.

And here I thought Kerry’s presidential chances for 2008 were killed last year.

Update, Maria’s quote of the day for today, Peter King, (R-NY) to Chris Matthews: ‘Just because the president doesn’t watch you on television, it doesn’t mean he’s not doing his job’

The No. 2 al Qaeda leader in Iraq was killed Sunday night, U.S. officials say. Abu Azzam, reportedly the deputy to Abu Musab al Zarqawi, was shot during a house rain(*) in Baghdad, according to Pentagon officials.

(*I suppose they mean a house raid)
This is importante news, and has long-range consequences. What are the media going to be yammering about instead?

This. The Anchoress asks, Can a posing session for Playboy be far behind?

Now, if they’d only lay off the McCartney sisters
IRA ‘has destroyed all its arms’.

Relatives of Mr McCartney said the IRA intimidation campaign against them was intensifying.

Watch it. Tell a friend.

Iran in the news
Why Tehran hopes for war

Suppose that the tussle over Iran’s nuclear plans goes to the Security Council — which fails to take a decision, thanks to Russian and Chinese vetoes, and America (after much huffing and puffing) launches airstrikes against Iran’s nuclear installations.

Iran’s retaliation could begin with orders to the forces it controls inside Iraq to attack U.S. and British troops. The Lebanese branch of Hezbollah would launch massive rocket attacks against Israel, while Hamas and Islamic Jihad (whose leaders spent the past month in Tehran, meeting Khamenei and his aides) would begin suicide operations against Israel from Jerusalem and the West Bank.

Iran-allied Hazara Shiites might begin strikes against Kabul, the Afghan capital, from the west, while Pushtun warlord Gulbuddin Hekmatyar and the remnants of the Taliban attack across all of Afghanistan.

U.S./U.K. forces might answer with a conventional attack out of Iraq. But the Iranians could retreat to the Zagross mountain range, the first line of Iran’s natural defences. The IRGC is now building several new bases to bolster this line. The bases would assure supplies for a quarter of a million troops, and provide shelter for half a million refugees from the border.
The Americans could attempt to “decapitate” Iran with cruise missiles against “regime targets” in Tehran. But the regime would already be in Mashad, protected by the Eighth Imam.
Meanwhile, Iran could close the Strait of Hormuz — thereby choking off the world supply of oil, which would surely top $100 a barrel, plunging the global economy into a crisis..
The U.N. Security Council would surely meet in emergency, perhaps forcing the U.S. to veto a vote for a ceasefire. Global TV networks would air images of “indiscriminate carnage” and “wanton destruction” in Iranian cities, while marches in Washington and dozens of other cities would feature Hollywood celebrities and others calling for impeachment.

At this point, the Iranian strategy/fantasy would expect the U.S. media and Congress to revolt against President Bush and his “pre-emptive” strategy — obliging Bush to accept a U.N.-brokered cease-fire and withdraw his forces, and the Americans to leave Iraq and Afghanistan.

The victory would bring the Islamic Republic new domestic legitimacy, allowing it proceed to crush its internal opponents as “enemies of the nation and of Islam.” It could also speed up its nuclear-weapons and long-range missile programs without being harassed by Washington.

At the next stage of what Ahmadinejad sees as “a clash of civilizations,” Iran would become “the core power” of a new “Islamic pole” in a multipolar system with China, the European Union and Latin America (under the leadership of Venezuela’s Hugo Chavez) emerging as other “poles.”

The Islamic Republic would then be free to proceed to address what Khamenei has described as its “greatest historic task”: the destruction of Israel.

I would add Mugabe in Africa to that “multipolar system”.

A worst case scenario? Michael Ledeen has been pondering Iran<

The mullahs are altogether capable of deciding that events are now running strongly in their favor, and that they should strike directly at the United States. They look at us, and they see a deeply divided nation, a president who talked a lot about bringing democratic revolution to Iran and then did nothing to support it, a military that is clearly fighting in Iraq alone, and counting the days until we can say “it’s up to the Iraqis now,” and — again based on what they see in our popular press — a country that has no stomach for a prolonged campaign against the remaining terror masters in Iran, Syria, and Saudi Arabia.

Osama bin Laden came to similar conclusions, and ordered the events of 9/11. Why should the Iranians — who have been major supporters of the terror network ever since the 1979 revolution — not do the same?

Our main enemy, the single greatest engine in support of the terror war against us, whether Sunni or Shiite, jihadi, or secular, Arab or British or Italian or Spaniard, is Iran. There is no escape from this fact. The only questions are how long it will take us to face it, how effective we will be when we finally decide to act, and how terrible the price will be for our long delay.

As Ledeen said, “The sham nuclear negotiations were in large part a way of avoiding what should be the central issue: Iran’s central role in the terror war against the West”.

India Votes with US on Iran

Group Formed to Champion Taxpayers
A new group simply named the Princeton Taxpayers Association has been formed as an advocate for resident homeowners of Princeton Township who fear they will be financially driven from this community. Long term residents Jim McKinnon of Edgerstoune Road and Sheldon Leitner of Stony Brook Lane have joined to organize the group.
With property taxes up more than 50% in the past five years and projected to double again in another six or seven, we believe it is time for taxpayers to organize so that they have imput into the process and hold elected officials accountable for making the most prudent use of available resources.
The rapid uncontrolled rise in Property Taxes is an issue which should concern eveybody in town. More and more long term residents are being forced to sell. One long time Ewing Street resident noted sadly that many neighbors had already sold and moved and they were afraid they would have to follow them; then asked, “but where?” Also, for a growing number of residents the effect is multiplied as property taxes are no longer a deductible expense for Federal Income Tax purposes as they become ensnared by the Alternative Minimum Tax.
We are already seeing the effects. Has anybody noticed all the “For Sale” signs around town? Some say that this is people cashing in on the real estate boom but, the only ways [sic] to benefit is either to leave the area or trade down. Does this benefit the community? It certainly changes the demographics.
In California and Massachusetts, voters took the property tax punch bowl away from the politicians. In Massachusetts limiting both the total amount communities can levy by property taxes, including for schools, as a percentage of assessed value as well as year to year increases to 2 1/2% without going to the voters for approval.
The group desires to work with Township Committee and the School Board with the goal of limiting future spending and tax increases to the rate of inflation. The group is non-partisan and welcomes all who wish to participate.
The group may be contacted by email: princetontaxpayearsassn@yahoo.com or by phone at 609-921-3732.

A friend just emailed saying there’s going to be a meeting Thursday, September 29 at the Hun School, 7:30 p.m.

All proceeds from this auction will buy much needed supplies for American snipers in Iraq. You receive the autographed book. A letter of thanks from Adopt-a-Sniper for the donation in your name.

Wait, that’s not all.

Mr. Galloway receives an itemized thank you letter acknowledging his generous fundraising effort and support of what hopefully amounts to a few well-aimed shells to the head of a suicide bomber who would have taken 20 Iraqi children with him.

You also get a framed copy of that letter.

I wonder if Hitchens thought this one up. 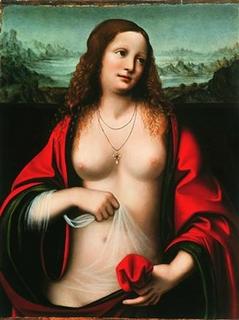 I give it an “F” for fake
I first saw this at Cake Eater Chronicle the other day. Here‘s a related article.

If you look at Leda and the Swan, Leonardo’s only other known nude, and compare it to the painting above, the babe in the painting above looks like a Leonardoesque face photoshopped on top of a Playboy chick’s post-implant-and-liposuction-body.

Will it end up at the Getty? Maybe not since Frel‘s gone.

I wonder what Thomas Hoving has to say.