Maria’s price-per-gallon comparison
Just this morning I was driving a family member (while we were listening on the radio to a report on the price of gas), who asked, “mom, how much is a gallon of milk?”. I explained $3 – $4 depending on the brand, but if “organic”, as much as $7. Said family member was glad the car doesn’t run on milk.

As a coincidence, my friend Maria emailed a price-per-gallon comparison:

and the buyers don’t even know the source. (Evian spelled backwards is Naive.)

For some reason I have a craving for some icy-cold Diet Snapple all of a sudden.

Update Via The Llamas, State Department spokesman Sean McCormack said earlier on Wednesday 10 to 12 foreign governments have offered general assistance to the United States to deal with the hurricane aftermath but no decision had been made about how these offers might be used.

Via Arthur, some continue unmoved

Islamic extremists rejoiced in America’s misfortune, giving the storm a military rank and declaring in Internet chatter that “Private” Katrina had joined the global jihad, or holy war. With “God’s help,” they declared, oil prices would hit $100 a barrel this year.

Chávez, after offering help to the USA yesterday, reversed to character and went back to insulting Pres. Bush,

Venezuelan President Hugo Chavez, a vocal critic of the U.S. government, on Wednesday called U.S. President George W. Bush a “cowboy” who had failed to manage the Hurricane Katrina disaster and evacuate victims.

I expect some GWB-haters to be repeating Chávez’s script instead of doing something constructive.

Fortunately, the rest of the world is responding:

“We are getting calls from the Swiss public looking to express their condolences, (and) people are also asking for an account number where they can make donations,” said spokesman Daniel Wendell.

German Chancellor Gerhard Schroeder offered aid and assistance, saying he had called on several ministries to come up with a detailed list of what kind of aid they could provide.

informed President Bush and the governors of Louisiana, Mississippi and Alabama that they are ready to help with whatever is necessary

Australia has offered to send two specialist emergency managers to the US in the wake of Hurricane Katrina.

Last but not least, France May Mobilize Relief From Caribbean

Bloggers: Hurricane Katrina: Blog Relief Day Begins at NZ Bear. My charities of choice are the The Salvation Army 1-800-SAL-ARMY and the American Red Cross 1-800-HELP-NOW. While the American Red Cross so far has raised an amount comparable to the response for tsunami victims following the devastation in Asia earlier this year, the devastation is vast, and hurricane season doesn’t end for another two months.

Update 11:40AM The government of the Phillipines is assisting people who are trying to contact relatives in the disaster zone.
Russian diplomats assist Russians in hurricane zone; the US does not currently believe it is practical to send a Russian rescue plane to areas hit by Hurricane Katrina in the United States, but will reconsider a Russian proposal to do so later if need be. The problem with a plan is that it needs adequate landing space — both air space, and landing area.

Update, 1:50PM Israel‘s offering assistance and expressing sympathy (link courtesy of an anonymous commenter)
In India, The National Federation of Indian American Associations has launched a campaign to raise funds for the victims of Hurricane Katrina

All funds collected will be handed over to the American Red Cross and other charities, NFIA President Rajen Anand said on Wednesday

The Muslim Council of Britain

has undertaken to mobilize all its affiliate emergency agencies, including Muslim Aid, Islamic Relief, Muslim Hands and other relief agencies, to render assistance to the survivors and their relatives.

Italy has offered to send aid to the U.S. and has readied two military transport planes to carry supplies and personnel to New Orleans or other areas hit by Hurricane Katrina, Italy’s Civil Protection said Thursday.

Italy’s aid effort would include pumps, generators, amphibious crafts, tents, as well as experts in managing and assisting evacuees, the Civil Protection said in a statement.

Update, 4:50PM: US welcomes any aid offers from abroad
Foreign governments line up to help after Katrina:

WER’s Scotland charity partner has a fully equipped search and rescue team from Glasgow’s fire brigade ready to fly to America to help, if their skills are needed. This is being coordinated through the American Red Cross.

Taking a look at poverty
Venezuelan Politics Blog ponders Poverty In the USA.

Good news from Iraq
Via The Wide Awakes, 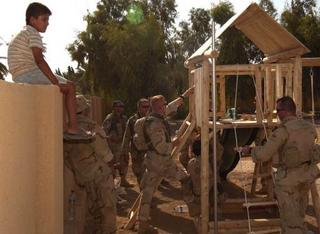