hi·jab ( P ) Pronunciation Key (h-jäb) n.
1. The headscarf worn by Muslim women, sometimes including a veil that covers the face except for the eyes.
2. The institution of protection of women in some Islamic societies through veiling or seclusion. 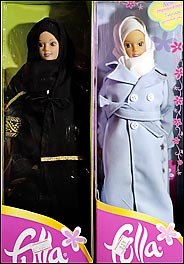 “My friends and I loved Barbie more than anything,” she said. “But maybe it’s good that girls have Fulla now. If the girls put scarves on their dolls when they’re young, it might make it easier when their time comes. Sometimes it is difficult for girls to put on the hijab. They feel it is the end of childhood.” “Fulla shows girls that the hijab is a normal part of a woman’s life,” Ms. Ghayeh continued. She gestured behind her, at a pair of excited little girls examining a rack of Fulla-branded Frisbees and pool toys. “Now the girls only want Fulla.”

And that’s exactly why I’ll keep my Puerto Rican Barbie, and my Ralph Lauren Barbie, thanks.

My nieces are too old for it, but the Kate Spade Barbie has the right image, too.

Update: Took me a while, but I found this Melanie Phillips post, and realted article, Islamic headgear is not essential

This headgear was invented in the early 1970s by Mussa Sadr, an Iranian mullah who had won the leadership of the Lebanese Shiite community.

In an interview in 1975 in Beirut, Sadr told this writer that the hijab he had invented was inspired by the headgear of Lebanese Catholic nuns, itself inspired by that of Christian women in classical Western paintings.
. . .
Sadr’s idea was that, by wearing the headgear, Shiite women would be clearly marked out, and thus spared sexual harassment, and rape, by Yasser Arafat’s Palestinian gunmen who at the time controlled southern Lebanon.

Now, imagine the outrage if a Catholic Archbishop (now, or thirty-five years ago) had declared that all women should dress like nuns, or else be subjected to sexual harassment and rape.