Good news from Katrina, day 2
International:
IEA says Katrina oil shock ‘severe’ but main damage repairable by year end
Nato expected to approve Katrina plans
Update: “We know what it is like to be on the other side of this, because of that we are saying thank you by responding in kind”
Booze ‘saved’ tourist from Oz.
Update 2 UK scientist found after Katrina

National:
You know things are looking up when the NYT front-page story has a favorable headline about organized religion: A New Meaning for ‘Organized Religion’: It Helps the Needy Quickly, along with a photo that speaks about race relations: 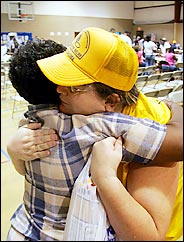 , and a story on the good work the Marines are doing From Falluja to the Shores of Louisiana; while the WaPo has the word “approves” next to the name “Bush”: Bush Approves $51.8B for Hurricane Relief
Even the IRS is helping, IRS Program Converts Vacation to Donation

The Internal Revenue Service on Thursday announced a program that encourages workers to give up unused vacation time and sick days and turn them into charitable contributions to aid Hurricane Katrina victims.

Employers would convert the donated time into cash contributions to charities while workers would reduce their taxable income by the number of days donated.

Update 2On the other hand, maybe the end of the world is near: Even the Beeb has a slide show of Church aid.

Don’t forget about southern hospitality. Here in Mississippi neighbors are helping neighbors. A chain saw, hot meal or the offer of a hot shower will help sometimes when money won’t.

The hospitality industry, too, The Chefs want to return
Another baby and mom are reunited.
Magic Johnson Promises Jobs for Katrina Victims
Montgomery Alabama Farmers and ag groups rally to help “neighbors” with Katrina
Mortgages steady or lower this week in wake of Katrina
Black society moved, mobilized by tragedy

This is one surprising item: Three Carnival cruise ships chartered to house Katrina evacuees in Texas and Alabama are being moved because of a lack of interest. What is not surprising is that the evacuees want to find permanent housing and enroll their children in schools. Understandably, some are also afraid of the water.
Recovery 2.0: The wiki, the place to work
Update Michigan’s sent 600 National Guard troops
Maria sent IN KATRINA’S WAKE Army tests ‘super-levees’
Goal is rapidly deployable addition to current earthen barriers
The Anchoress posts on New York and Texas.
Bellarmine gives evacuee free spot
Penguins, sea otters, rare Australian sea dragons and a 250-pound sea turtle named Midas will be airlifted out of the New Orleans Aquarium of the Americas on Friday after surviving Hurricane Katrina, and Monterey to take in otters, penguins
Even the pets help: Old Dog Saves Owner From Katrina
Update 2 New Orleans zoo survives Katrina

State and Local:
A 9/11 widow calls her storm relief effort the best kind of therapy
OUTPOURING OF HOPE AND HELP in Hudson County, while 44 Katrina victims relocated to Mercer, and Hudson County’s finest are now helping in New Orleans.
Hearts, wallets still opening, and the teens are helping, Teen with gift for giving is packing aid supplies.
A family in Lawrence takes in 23 relatives and friends, while >Missing fiance is safe, sound
Businesses, groups step up charitable efforts
If in Trenton, you might be able to attend two concerts this weekend to benefit victims of Hurricane Katrina

On Saturday night, strawdogs, a local rock ‘n’ roll band, will perform at Joe’s Mill Hill Saloon at 300 S. Broad St. The cover charge will be $5 . . .Information about the band can be found at www.strawdogmusic.com.

On Sunday, from 1 to 7 p.m., the music club Conduit at 429 S. Broad St. will host a “Mardi Gras Hurricane Relief Jam,” featuring more than 21 acts “displaying the rich and varied musical heritage of New Orleans.”

Admission is $10. All door proceeds will go to the Red Cross to aid Katrina’s victims.

A list of the performers participating in the fund-raiser can be found at www.conduitmusic.com. Additional information can be obtained by calling the club directly at (609) 656-1199.

Americans are a generous people; the most generous in the world.
Update Displaced Louisiana family settles in Princeton

I’ll again update later in the day if I have the chance.