More items on Katrina, from the NYT
What is the matter with the NYT??

Life is full of surprises. If you’d told me a few years ago that I’d be defending Geraldo Rivera, I’d laughed. But here it is. The NYT’s Alessandra Stanley, Styles editor, claimed that

(Fox’s Geraldo Rivera did his rivals one better: yesterday, he nudged an Air Force rescue worker out of the way so his camera crew could tape him as he helped lift an older woman in a wheelchair to safety.)

Fox showed the particular clip and
1. A man was carrying the woman on a wheelchair down a flight of narrow, steep stairs. He held the wheelchair handles, Geraldo held the feet of the chair from a few steps up.
2. A man in uniform (camo, helmet, etc., so I assume he’s a serviceman)came up and asked the man if he needed help. The man declined. Geraldo continued helping by holding the wheelchair, and didn’t interfere in any way at all.
3. No one was nudged, least of all the serviceman.
4. As of this morning, there was no retraction.
Geraldo probably has grounds to sue.

On the op-ed pages, Krugman’s making so that now Hindraker says, “We never go after Maureen Dowd anymore, because there isn’t any sport in it. Poor Paul Krugman is rapidly getting into the same category”. Right Wing Nuthouse lets it rip on The Fulminater, examining Krugman’s acussation that “federal officials had access to resources that could have made all the difference, but were never mobilized”

Never mobilized? A partial listing of federal resources not only mobilized but in place less than 24 hours after the hurricane hit make Krugman out to be either a sloppy, ignorant journalist with no business writing for a major newspaper (even if it is th New York Times) or a prevaricator of monstrous proportions.

The Coast Guard had 30 ships and 40 aircraft carrying out operations the minute that Katrina’s fury had passed.

There were 4,000 National Guardsmen assembled and deployed in Louisiana alone.

Political Calculations offers a few potential answers to the Krugman question, and you can participate in the survey, too.

Meanwhile, in the Business pages, The Conspiracy to Keep you Poor and Stupid finds that the NYT has managed to link Haliburton to Katrina.

At least the Times managed to carry a photo of a young Republican on the front page, while refraining from making any disparaging comments: 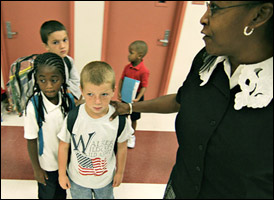 Update Jawa looks at An Idiot of the Highest Caliber, and just guess who would that be?
Update 2 Thomas Lifson:New York Times smears Houston catches the NYT saying,”No one would accuse this city of being timid in the scramble to profit from the aftermath of Hurricane Katrina.”

Excuse me? The City of Houston has thrown open its heart, pocketbook, homes, churches, schools, and all public facilities to its neighbors in need. The Astrodome was prudently stocked with disaster supplies because nearby Galveston might need them in the event of a big hurricane. Without a thought, Houston stepped up and became evacuation central. It will cost Houston taxpayers a lot of money, but nobody is giving a thought.

And you paint this city as a crass profiteer on its neighbor’s misery. That is beyond despicable. It is crazy.

These offensive words did not appear in the above-the-fold story printed in America. But Romero’s story was printed with these words as the lead in its Paris edition, quaintly still known as the International Herald-Tribune, even though it is a wholly-owned subsidiary of the New York Times Company, and is in effect the European edition of its flagship paper.