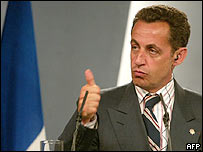 Sarko follows up on a promise
I read Scott’s post at the Daily Ablution titled Sarko for Home Secretary on how Nicholas Sarkozy, France’s Interior Minister, is deporting radical imams and terrorists to Algeria, as he had promised last month. Scott links to a Yahoo! News article (in French) titled, Un Algérien, père d’une famille française, expulsé en Algérie (An An Algerian, father of a French family, expelled to Algeria), which title alone would make for good material to post about the French Yahoo! News bias, but never mind that. The subject is Sarko.

To be sure, Sarkozy is not the first and only French politician to advocate economic liberalism and closer ties to Washington. But he is the first one to cater so carefully to “special interests”—such as unions, entrepreneurs and, most controversially, religious and ethnic groups—rather than the “general interest” invoked by most French leaders. Michel Maffesoli, a prominent sociologist at the Sorbonne, says that is exactly what makes Sarkozy popular. “He is the only French postmodern politician,” says Maffesoli. “He does not mind groups and understands instinctively the mosaical nature of today’s society, where the ideal is less integration than juxtaposition.”

Sociologists talking about mosaics and juxtaposition is all well and good, but Sarkozy’s not one to demur away from a confrontation within his own party, as he has repeatedly pressed for modernization and change.

Sarko’s popularity, which Prof. Maffesoli attributes to his catering to special interests, is probably due to a much greater extent to being a man of purpose. I can’t picture either Jacques Chirac or better yet, Dominic de Villepin getting on a fire-fighting aircraft in a demonstration of its airworthiness after a crash of another of the planes earlier this month. Jacques would have made a nice speech about solidarity, and Villepin would have avoided getting his hair and suit disheveled. Not Sarko.

His hard line on domestic terrorists is consistent: Today Bloomberg reports Sarkozy to Step Up TV Surveillance in Paris Amid Terror Concern

“We have decided that it was necessary to increase video surveillance, speed up our know-how of phone tapping and data storage,” Sarkozy said a day after the London bombings.

The proposal reflects increased pressure on European governments to step up security measures after the attacks in London, where suicide bombers blew up passengers on three subway trains and a bus.

Last month Sarko reinstated border controls. Not that all the news is good. As I posted last month, Captain’s Quarters had discussed how French Lies Sink British Ties, regarding France’s isolationist attitude in the war on terrorism, a problem that is likely to continue if/when Sarko’s elected president. But, at least for now, even in the middle of the Summer break, Sarko’s taking effective action.

Update: It will be interesting to see how this story develops France has no word on kidnapped Palestinian working for French TV, considering France’s Yes-No policies, and the Aubenas and Chesnot/Malbrunot kidnappings and ransoms, of which one of the drivers was rescued by the Marines.
(hat tip: ¡No Pasarán!)