The gaping hole of reality
According to Chavez things in Venezuela have never been better.

Never mind that his goverment is missing the opportunity of using oil money to remedy delayed maintenance to the country’s long-neglected infrastructure. The Caracas-La Guaira viauct is in danger of collapsing, because it’s being displaced by land movements. Some of the highways are impassable due to ground water saturation (both links in Spanish). Now there’s a sinkhole in the main highway, the Autopista Regional del Centro. The Devil’s Excrement explains,

To give you a perspective of how big the hole is, it covers both sides of the highway including four lanes and two parking lanes.

A picture’s worth a thousand words: Behold, 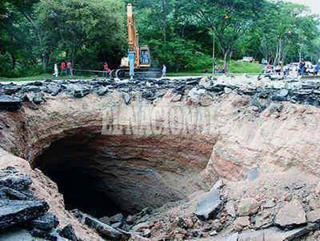 While all these groundwater problems would give pause to the average person, Chavez is quoting mass-murderer Che Guevara, “saying the revolution needs efficiency to succeed“, and is looking at adobe houses,

Taking the example of building adobe houses to express his frustration, the President says he’s happy to see adobe being used to solve the housing problems of 71 families but is not convinced because of the current speed of construction.

Adobe construction, normally used in very arid climates, is not what one would recommend to a country with a history of floods.

Chavez said patients from the US were also being included since the Bush administration continues to exclude a sizeable portion of the population from health care.

Hugo ignores the fact that Medicaid and Medicare cover eye surgery, but my question is, just who are the “poor” American patients that have enough money to travel to Cubazuela for that, but no money to pay an AMA-qualified specialist? Do they even exist?

Nonetheless, as far as efficiency goes, The Economist’s article Using oil to spread revolution points out,

All the same, Mr Chávez’s successes are fragile ones. For one thing, it is hard to see what tangible benefits Venezuelans derive from this diplomacy. Mr Chávez has alienated both of his country’s main trading partners, the United States and Colombia. Oil revenues are increasingly being spent without democratic scrutiny. A once-professional diplomatic service has been turned into a branch of the revolution, its dissidents either purged or neutralised. And although the alliance with Cuba has brought new social programmes, their cost and long-term benefits are hard to determine. Despite the oil boom, unemployment officially stands at 11%.

There are also limits to the region’s tolerance of chavista expansionism. Only Cuba has signed up for ALBA. The richer Caribbean countries are unenthusiastic about Petrocaribe. Petrosur and Petroandina feature much rhetoric and little action. Cuba apart, no other country shares Mr Chávez’s distaste for representative democracy, or his disdain for regional bodies such as the Inter-American Commission on Human Rights.

In a setback for Mr Chávez, on July 27th the Inter-American Development Bank, the region’s largest official lender, chose as its new president Luis Alberto Moreno, Colombia’s ambassador to Washington who was discreetly backed by Mr Bush. Mr Moreno easily defeated candidates from Brazil and Venezuela.

Argentine officials have welcomed imports of fuel from Venezuela, and its help in making contacts with China, but they are cooling towards Mr Chávez. Were evidence to emerge of his hand in Bolivia’s turmoil, South America would become even warier. Should Lula’s troubles deny him a second term, Brazil is likely to move to the centre-right, shifting the regional balance. The death of Mr Castro, who is 78 and frail, would be a body blow to Mr Chávez. So, of course, would a fall in oil prices.

Speaking of having alienated neighbors, Colombia blocked Fidelugo-TV Telesur’s broadcasts this week. With characteristic tact, the official Venezuelan government news website regards this move as The 4GW (4th generation war) has shot a cannonball across the bows of South American TV station, Telesur. The Miami Herald says Fidelugo-TV “has already proved better at making the news than reporting it.”

(If you wonder what the hey is a “4th Generation war” is, here’s a link)

The Bolivarian revolution rolls right along, though. Castro’s attendance at the graduating military class in Venezuela was cancelled since the graduating class quit rather than have him as a sponsor. Now Fidel Castro Presides Over Venezuela Military Graduation, but this time in Havana, not in Venezuela*.

President Castro called this decision of the Venezuelan military academic institution spontaneous and unexpected, something unimaginable only a few years ago, and he accepted it in the name of the Cuban people.

It all goes down the gaping hole of reality, folks.

Update I’m guest-blogging at Babalu, too!

Update 2: * Aleksander Boyd: “All doubts as to who’s in charge of Venezuela have dissapeared this day”.