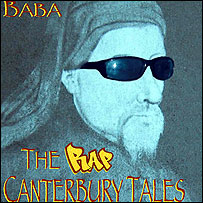 A rap artist has translated some of the best known works of poet Geoffrey Chaucer into hip-hop to make them appeal to schoolchildren.

He is to tour English schools with his versions of the Pardoner’s Tale, Miller’s Tale and Wife of Bath’s Tale.

Baba’s no Eminem or SnoopDog, though:

Some of Chaucer’s original bawdier language had to be “toned down” for his young audience.

The BBC article states that “Chaucer, who lived from around 1340 to 1400, was also a courtier and diplomat”; to the best of my knowledge he did not roam the English countryside in the buff.

In related Chaucer news, (via Why oh why must everybody have a blog?) [HARRY POTTER SPOILER ALERT] Dumbledore’s death in the style of Geoffrey Chaucer: The Poppynge of the Clogges.

Update M. emailed saying that Chaucer in sunglasses reminds her of Bono