Last week’s host Sluggo Needs A Nap after all his work but this week he’s been reading up on Eudora Welty. It’s going to be hard to come up with as good a post as Sluggo’s, but welcome to this week’s Carnival of the NJ Bloggers. Let’s start with dessert, of course.

Dojo Mojo has the latest on ice cream festivals and ways to enjoy the Summer in the Jersey City area, including Aloha, say the pretty girls. Wine Goddess likes to add some Pedro Jimenez to her ice cream. Mmmm.
Life is short, have dessert first, especially if it’s spiked. 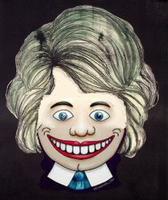 Commuters As a former commuter I know a little ice cream is good when you take the train to and from the city since commutes are frequently delayed.

Commuter Jeff Jarvis says search me even if it adds to his commute. Another commuter, Jersey Side, reveals what’s in the bag, and, like myself, keeps cheese sticks handy. Update Gigglechick not only got searched, she got interviewed, and quoted.

You’ll find NJ bloggers in all the professions, some commuting to New York, some to Philadelphia, and some commute within NJ. TigerHawk managed to do some Parkway Blogging on his way to the Adirondacks. Not commuting to work yet is Mary of Mary’s Lame Attempt at Fame, who’s studying for the Bar exam.

Mary of Exit Zero examines the idea of classifying terrorists as we once classifed Pirates, as Enemies of the Human Race, in her post Terrorism: Been there, done that. Northeast Corridor posts on why they hate us, and on multiculturalism backlash.

Likelihood of Confusion Blog by lawyer Ron Colman posts on copyrights and trademark cases, and has been taking a look at Little McCain Feingolds and Their Allies. Blogger Dan Riehl, who’s been doing an excellent job covering the Natalee Holloway investigation, has also been posting on other matters, like terrorism and a Sex Smuggling Ring Busted.

SloppyDawg posts on a different item in the news, and the subsequent Deep Smear. The Opinion Mill looks at reporters and finds them Weak In The Knees.

Imagination, and reality Imaginary Therapy, which is from a blogging therapist, comes across some precocious baby talk, imaginary or not. Speaking of therapy, Extreme Psychosis has been watching “reality based” TV and its Skewed Reality, and doesn’t like what’s there.

Not imaginary at all are the shipwrecks of Shipwrecks Blog, whose creator, David A. Bright, just got back from Newfoundland after visiting the Titanic and will be reporting his findings at a conference in Washington next September. Before that, he asks us to make sure we watch the Discovery Channel today

Please don’t miss James Cameron’s LIVE dive to Titanic documentary that will air July 24th on the Discovery Channel. I have seen the equipment used while on Keldysh and it is on the cutting edge of underwater technology. This documentary is a must-see event.

The Center of NJ Life takes a peek at some of the things visitors have come searching for at her blog, while Poor Impulse Control ponders karma and The Fine Art of Acting Nonchalant while minding the store.

Joe’s Journal is Looking Back At New Year’s Resolutions, and Joe has earned our hearty congratulations – take a look at his list, and wish him continued success.

Rob of Laughing at the Pieces remembers Ed McBain in Evan Hunter, R.I.P., a writer whose work defines a genre.

New Jersey NJ politics are always a ripe subject for writers, journalists, and of course for bloggers. Jackie Corley, who’s all three, looks at the Aberdeen-Matawan Train Station redevelopment project asks, Does the arm of 1260 Stelton have Monmouth in its grasp?

Hondo at inadmissible evidence posts about a politician trying to ban smoking in cars. As Hondo says,

Now that New Jersey has solved the problems of high property taxes and outrageous car insurance premiums, it’s time to move on to other pressing problems.

Mr. Snitch! has a post on Our “forgiving” political culture and a new “star lobbyist”. Mr Snitch’s post led me to Eye On Hoboken’s article on Kay Elizabeth LiCausi’s questionable “Climb Up the Ladder”. As Eye On Hoboken points out, Ms. LiCausi is also vice chairman of the Hudson County Democratic Party, an elected position.

Smadanek takes statistical analysis to Educational Performance and finds that

New Jersey classifies school districts by District Factor Group (DFG), which indicates “the socioeconomic status of citizens in each district.” Based on US Census data, the factors include adult education levels, occupations, population density, income, unemployment, and the percent of residents below the poverty level. DFG is strongly correlated with student performance.

NJ Conservative finds a snake — not on the grass, but on the wall — that makes yet Another Reason School Taxes are out of Control

eCache realizes that the Gas Tax Hike Does Not Solve the Problem of mismanagement at the Transportation Trust Fund. I urge you to not only read this post, but to look into how your municipality is budgeting its expenses.

Here at Bad Hair Blog HQ our bad hair is due to high taxes, but Katespot’s post about doing the roots is a hair care lesson as of itself.
Jim of Parkway Rest Stop notices how some people are bothered that in NJ the liquor stores on Sundays open Not Until Noon. Last month Jim had a Village story that reminded me of a song from the dying days of disco.

The Rix Mix visits Asbury Park and listens to a radio broadcast, for which he says, At last, Asbury Park wins a kewpie doll!.
Down The Shore blog remembers Saul the Vegetable Man of Bradley Beach.
Beach Blog is always ready for the beach, and is now pledging allegiance to the sun.
The Jersey Shore Real Estate Bubble Blog remembers when Sea Bright used to flood.

Speaking of real estate, The Art of Getting By will be buying her first house soon and she explains what it’s like to go looking to live in all the wrong places.
The Barista survey their neighbors, and you, too, if you’d like.

Currently, there are no large monuments to Edison’s achievements in town. A fading black structure, called the “Black Maria,” sits on Main Street. It is the world’s first movie theater. The Middle School named in his honor has since been renamed. There are, however, plans to “redevelop” the site and turn it into luxury loft-style condominiums. Much of the plan also includes the potential taking of residential and commercial property via eminent domain — made much easier by the recent Supreme Court decision involving the City of New London, Connecticut.

Which brings us to the next blog: If you are worried about Eminent Domain issues, stop by
NJ Eminent Domain Law’s bog. This week he’s looking at New Jersey Eminent Domain Redevelopment: Forest City Ratner coming to Bloomfield

The interview with the producers, creator, and cast of “Freshman Seminar” has been scheduled for this Thursday, 7:00 p.m. EST, July 28 on PowerTalkFm.com.

Tune in for a behind-the-scenes look.

Roberto at DynamoBuzz notes that the new hockey arena in Newark is built on a centuries-old cemetery and wonders if the hockey NJ Devils will experience some poltergeist type activity. Or a jinx that will foil their attempts to win a Stanley Cup.

The Nightfly comes up with the World’s first friendly fisk,

Popular culture is lazy. It settles. Actual accomplishment, on the other hand, requires effort. It’s work to come up with a good idea and see it through. It’s hard to come up with a persuasive argument that makes sense. And of course, the rewards are not always apparent – the idea may be slow to find an audience, and the argument may not convince until reinforced years later. It’s quicker to grab attention with bawd and spectacle, or to lob insults.

On Friday Jersey Writers started a 3-part series on the proposed New Jersey Music Hall of Fame, and she opens the post with something written by Old Blue Eyes himself. While the NJ Music Hall of Fame would be in Asbury Park, Sinatra’s probably Hoboken’s most famous native, and Maxwell’s is one of Hoboken’s best known nightspots; Mary of Exit Zero was visiting Maxwell’s the other evening and found that it’s got a great beat.. If this is paradise I wish I had a lawn-mower looks at some talking heads.

One Trick Pony tells us that “One Trick Pony is a humor magazine available in print and online. Featuring stories, poems, lists, essays, and tomfoolery. Also contains the adventures of Arnold Schwarzenegger”, so drop by sometime.

This weekend Dan of 11th and Washington took to Baseball and the road,

Three games, three ballparks, three cities, three days. Three teams in the tight NL East race. Had I thought of tackling this trip on a different weekend, when the Braves and Marlins were visiting two of the stops, I could have seen the entire division.

while fellow sports blogger Liss is More pays attention to the Mixed messages on steroids.

Today’s Carnival started with ice cream and commuters, and will leave at the ballpark with some coffee: Coffeegrounds found out that a little Cream would cost $3,295 That’s US$, not pesos, kopecks, or lempiras. At those prices, I’ll take my coffee black, thanks.

Remember to watch the Discovery Channel tonight, and listen to PowerTalk FM Thursday.

Next week’s carnival will be hosted by Smadanek. Please send links to njcarnival@gmail.com for posts you would like featured in the next Carnival.

Thank you for visiting, and don’t miss next week’s Carnival!

UPDATE
The Pink Panther recovers, and finds out that the past is the new black.