Thanks for the concerts, Bob 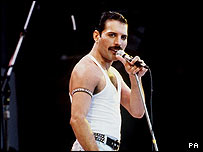 Live Aid was twenty years ago, and last night the Philadelphia PBS TV station was carrying some of the top stars’ numbers. I wished they had carried the full Queen performance, but seeing Freddy in top form singing “Radio GaGa” was very nice. The song’s lyrics are at the same time reminiscent of old times, back when people got their latest news and music from radio and not the internet,

and up-to-date, with mentions of old time stars, and the War of the Worlds film opening this weekend, inspired by the H.G. Wells book and the Orson Welles broadcast:

Freddy was great, the concert was great, “all those old time stars” were great, and it looks like it was a heck of a hot day at Wembly. I wouldn’t know firsthand; I was in NJ. I didn’t even try to get to the Philadelphia concert.

A website states that Live Aid, like Band Aid before it, was held to raise money for victims of the famine in Ethiopia.

Bob Geldorf claims, “That event was “almost perfect in what it achieved”.

The concert was held to raise money for victims of the famine in Ethiopia. So the question is, what has happened in Ethiopia in the last twenty years?

The BBC’s country profile of Ethiopia states, Ethiopia remains one of Africa’s poorest states, with a very low income per capita and a population that is almost two-thirds illiterate. Last May The Economist while writing about the elections held on May 15, 2005, showed that Ethipoia remains in the bottom 5% of the poorest countries (ranking 170 out of 177) (emphasis mine):

It was the freest election ever held in Ethiopia, though that is not saying much. In the past 3,000 years, the country has spawned great civilisations, but nothing resembling a modern democracy. Only 14 years ago, it was under the grip of a Marxist regime, the Derg, whose leaders thought mass starvation a useful tool both for crushing rebellious tribes and for easing overpopulation.

Since the Derg fell in 1991, Ethiopia has become a less harsh and more open society. Western donors see it as a test case for the argument, advanced by Britain and others in the run-up to the G8 summit in July, that a doubling of aid could help lift Africa out of poverty. The theory is that aid yields the best results if directed at moderately well-governed countries with lots of poor inhabitants. With 71m people, Ethiopia is by far the most populous country in the bottom tenth of the UN’s Human Development Index, a composite measure of poverty, ill health and basic education. (In 2004, it was ranked 170th out of 177.)

Under Meles Zenawi, who toppled the Derg and now rules pragmatically as prime minister, Ethiopia is doing better. Tony Blair, Britain’s prime minister, thinks so highly of Mr Zenawi that he asked him to sit on his Commission for Africa. Donors believe that with more help (Ethiopia already gets $1 billion a year, excluding food aid), the country could take off.

With aid, however, comes scrutiny. Donors prefer their clients to be democratic, and Ethiopia is imperfectly so. The ruling coalition, the Ethiopian People’s Revolutionary Democratic Front (EPRDF), enjoys vast powers of patronage. The state owns all the land in Ethiopia. Peasants are therefore reluctant to upset anyone in a position of power for fear of being evicted, and some 85% of Ethiopians are peasants.

The BBC’s search page on Ethiopia shows there are reports of electoral fraud, post-election violence, and kidnapping remains a problem. The Economist article ends by saying, “The love affair between western donors and their latest darling could yet prove stormy.”

The Economist illustrates a few of the problems in aid for Africa with The $25 billion question.

The Live 8 organizers would probably balk at what I have to propose:
1. Good governance by African nations. True democracy, the rule of law, and the end of corruption.
2. Clean water.
3. The judicious use of DDT for malaria control.
4. The development and use of new crop varieties — yes, the dreaded GMOs.
5. The abolishment of all farm subsidies in the USA, the EU, and all countries, and the fostering of free trade.
6. The encouragement of private education.
Other effective actions currently under way are the vaccination initiatives, the combat against HIV/AIDS, and microloans for very small businesses.

Will Live 8 encourage any of these? I don’t think so. Geldorf, for one, miracle-thinks

It would take the G8 world leaders – from the world’s leading industrialised nations plus Russia – “moments” to solve the problem.

Small wonder that people like David Stubbs are saying,

I simply do not think it is right that ex-pop star Bob Geldof should be the human catalyst for one of the biggest problems facing mankind – it is beyond the wisdom of Solomon, let alone Geldof. He is not up to the job.

Even more drastic is the Samizdata quote of the day,

You know what, I’ve finally understood what this whole “live 8” nonsense is about. I twigged when I heard a quote on the news, something like “this is all about you, the leaders of the G8, because you make the decisions”. Recognise the instinctual pattern: singing and dancing, mass ecstatic rallies, high moral cause, loud appeals for attention and for aid from on high – they’re praying, to the only gods they know.

What do I expect from Live 8? A really big concert.

The all-star line-up of old rockers at Live Aid was great. Otherwise, I’m rather underwhelmed by the Live 8 line-up, but maybe local bands (which apparently will be playing before the 12 noon official starting time) on the Philadelphia radio stations would be worth listening to. KYW TV has coverage of the concert.

Thanks for the concerts, Bob, but simply throwing money at a problem doesn’t solve it. It won’t take “moments” to solve African problems. Beyond that, multi-millionaire celebrities trying to get me to empty my pockets is all Radio GaGa.

(PS, If money’s the cure-all, how about each of those celebrities donate to the cause the amount of money they’d make in one concert?)

Update Hispalibertas links to an article with the following,

In his testimony before the U.S. Senate Foreign Relations Committee in September 2004, Ghanaian Professor George Ayittey from the American University documented the following amounts of grand embezzlement among African leaders:

It’s going to take more than a few moments, Bob.