President Jacques Chirac of France fired his loyal, long-suffering prime minister today, a direct response to the country’s decisive rejection of a referendum on the constitution for Europe that was as much as rejection of his 10-year presidency.
. . .
The choice of Mr. de Villepin, 51, a well-born, high-octane former career diplomat who has never held elected office and writes poetry in his spare time, means that Mr. Chirac has no intention of abandoning his vision of a grand and glorious France with a unique leadership mission in the world. 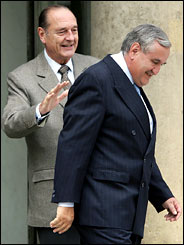 I like that high-octane phrase. It suggests gas. It also reminds us that Jacques really needs “something” to keep him in office — and out of the clink. The NYT has a photo of Chirac waving bye-bye to Raffarin, his third PM in as many years. If the name Dominique de Villepin sounds familiar, the answer is yes.

Libération has an article (in French) L’équation impossible de Chirac (Chirac’s impossible equation) describing the internal machinations leading to the cabinet changes. Chirac faced intense pressure from members of his party, and from Parliament, who wanted Nicholas Sarkozy as PM. One of the reasons for the oppostion to Villepin is that Villepin has never held an elected office

the BBC’s Caroline Wyatt in Paris says that as a career diplomat never elected to public office, he of all candidates most typifies the French elite so roundly rejected by the French people on Sunday.

Allow me to point out that Sarko remains France’s most popular politician — in spite of recent marital problems.

Sources close to the matter told Agence France-Presse that Nicolas Sarkozy, currently the president of Chirac’s UMP party, will be the new interior minister, a post Sarkozy has already held under Prime Minister Raffarin.

At The Economist (emphasis mine):

Last but not least, many Frenchmen rejected the constitution simply because they have had enough of Mr Chirac, and of his government’s failure to revive the economy and cut France’s high unemployment—and wanted to slap him in the face. The result is certainly a crushing blow to the president. He said before the vote that he would not resign if the result was non, but the defeat has almost certainly wrecked his chances of running for a third term in 2007. His internal rivals, most notably Nicolas Sarkozy, the ambitious head of Mr Chirac’s conservative governing party, the Union for a Popular Majority (UMP), are already sharpening their knives.

The Interior Minister is the 2d-ranking post in the government. Interesting that Sarko’s back in the Cabinet, since Jacques made Sarko, who had been minister of the interior previously, quit his cabinet post as minister of the economy when Sarko became leader of their political party, UMP. A matter of keeping your friends close, but your enemies closer, Jacques?

Update Sarko’s one of the Two men and a woman who can save Europe, according to the UK’s Telegraph.