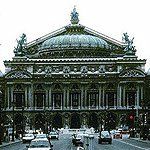 Yesterday while I waited for the Memorial Day parade to start I went browsing at Micawber’s and came out with a used copy of The Phantom of the Opera novel, written by Gaston Leroux in 1911. The novel starts with an introduction and the first line states, “The Opera ghost really existed”. This edition has the complete translated text, even when the Independent Publisher (according to the Amazon site) considers it a “children’s version”. The Barnes and Noble Classics edition I purchased also has a very entertaining foreword by Peter Haining, who peppers his essay with lots of exclamation points but gives a lot of background information in just a few pages on the Opera building, Gaston Leroux, and the various film productions of the novel. The Paris Opera itself is now housed in a different location, but the original building still stands.

My favorite Phantom of the Opera film version is the first, from 1925, originally a silent movie that was later re-released as a talkie in 1929. The film, in black and white with some colored sections, stars Lon Chaney, one of the greatest film actors of all time, in what many consider his most memorable part (a quick Google search shows there even are Lon Chaney Phantom action figures). The Leroux novel was intended to be a horror novel, and this version qualifies. Over the years, the story of the Phantom has been reinvented and reissued in various forms, and while none of the films I’ve come across was anywhere as good as the original (and some really are awful), the 1945 version with Claude Rains was entertaining enough.

In the 1980s Andrew Lloyd Weber wrote the stage musical and Phantom fever struck the masses. I’ve seen a lot of ALW musicals, and the one thing I don’t like is that the music tends to stay with you for a day or two after, whether you’d liked the music or not. This usually puts me in an ornery mood. Andrew Lloyd Weber’s version changed the story’s slant from horror to that of a gothic romance, which is more appealing to the general public, and the show is still playing on Broadway at the Majestic Theater. The stage design, however, remained true to the Lon Chaney film and is quite lovely, especially when the Phantom carries Christine to his lair and the chandeliers come up from the stage floor. The ALW musical was a hit in London, in New York, across the USA, and toured the world.

I saw the original Broadway cast in the late 1980s and was not impressed at all. The singers were just not up to it on the day I went, the singing was not what one would pay for in a Broadway show, the acting was pretty awful, and the general effect was rather cheesy, in spite of the nice special effects. I came out with the definite impression that Christine’s part was there simply to showcase Mr. Lloyd Weber’s then-wife, and everybody else was just playing along.

In August of 2001 I went back with my family, who hadn’t seen it, and what a difference a good actor makes! One of the challenges of playing the Phantom is that it is a “designed” character: the hairdo, make-up and clothes remain the same no matter which actor’s doing the part, and then there’s that mask hiding half of the actor’s face. The evening we saw it Howard McGillin was the Phantom, and he was phenomenal. His voice was definitely up to the demands of the part, and gave the Phantom a rich sound while conveying a tormented soul, but without overacting. Mr. McMillan’s Phantom dominated the production even when the character itself is not on stage for many scenes. He transcended the “designed” constraints. In a word, he was good. Really good.

Considering how the ALW version has generated box office revenues of nearly $1 billion, it was only a matter of time that it would make it into film, which it did last year, and now it’s out on DVD. Gerard Butler plays the Phantom, and also does his own singing. Mr. Butler cuts a handsome dashing figure in Phantom cape and ruffled shirt, so much so that a slightly more sophisticated Christine probably wouldn’t have minded his disfigurement (I could almost hear her say, “No problem, honey. Let’s just blow out a few candles and don’t fuss too much with that mask. Just relaaax”), if only the Phantom hadn’t turned out to be a murderous psychopath. Mr. Butler does have a rocker’s voice, which apparently is what Mr. Lloyd Weber wanted, but Mr. McGillin’s sound was a lot more pleasing to me. Emmy Rossum played Christine and looked suitably pale and lovely. The movie extends the musical in several ways, including many shots of the labyrinths of the Opera house, but all that doesn’t really add much to the story. I actually prefer the stage version of “Masquerade” to this film’s, in part because the stage Phantom wears a fascimile of the Chaney “Mask of the Red Death” costume. All the same, if I had a choice of the stage version with Howard McGillin or this film, I’d certainly pick Mr. McGillin’s (I would have also cast him as the film’s Phantom). However, viewers who haven’t seen it on stage will probably enjoy the film.

One nice thing about DVDs is that one can watch musicals with English subtitles and sing along, just as people used to do in the olden days at midnight shows of the Rocky Horror Show. You too, could enjoy a Phantom of the Opera sing-along, and maybe even host a Phantom-theme party in the comfort of your own home. Think of it as the interactive Phantom.

However, if you want the full-impact Phantom, drop by Princeton University Chapel on Halloween and watch the Lon Chaney version on screen while the Chapel organist plays the original score of the silent film. No matter how many times you’ve seen the original, you’ll still gasp when Lon Chaney’s Phantom removes his mask. You, too, will believe that the Opera ghost really existed.

Now, that‘s what I call one Phantom-theme party!