The UN, unexpanded
In this morning’s NY Sun, Plan To Abandon ‘Swing Space’ May Have Sunk Hopes for Consolidation Space:

Secretary-General Kofi Annan’s recommendation that the United Nations abandon plans to build a 35-story “swing space” on a neighboring city park may have hurt the world body’s chances of ever getting Albany’s approval for constructing consolidation space there, state legislators said yesterday.
. . .
The Senator, Serphin Maltese, a Republican of Queens, said: “Now that there’s no necessity for us to consider it in any timely manner,” it is unlikely the Senate would consider the bill in this session, or would “act at all at any time in the future” to help transfer the park for U.N. use.

In terms of consolidation space, the United Nations “should be looking for an alternative site” to New York, and “now they’ll have plenty of time,” Mr. Maltese said.

The possible relocation of U.N. headquarters to Europe, either temporarily or permanently, has been suggested both by opponents of the organization who want it out of America, and by those who would like to see the world body remain here but worry that not granting the organization the facilities it seeks would force it into the embrace of eager European cities, such as Bonn, the former West German capital.

U.N. officials, however, dismissed the idea yesterday. Given the cost and difficulty of relocating the headquarters abroad, the chances “are extremely remote that we’ll have to go very far away,” one official said. Under the terms of yesterday’s briefing, officials could not be identified by name. 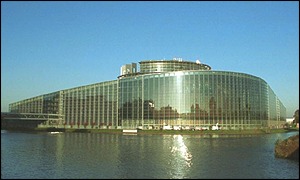 France has the facilities in Strasbourg, if the EU Parliament would ever consider consolidating its current dual-location Brussels/Strasbourg arrangement to simply operating from Brussels.

The current dual EU Parliamentary headquarters arrangement is supremely impractical. EU Group Leaders have quit over the nonsense of splitting the parliament between Brussels and Strasbourg, a hugely expensive endeavor (140 million Euros/yr) that involves transporting every Friday, before the Strasbourg “week”, huge metal trunks known as “canteens” with the hundreds of documents that might come in handy.

Once the session is over, the documents are transported back to Brussels and the whole process is repeated. Efforts to consolidate the Headquarters in Brussels have gotten nowhere, as you can see from the date of the article (2002), because

The trouble is, France likes having a major EU institution on its soil, as do the hoteliers and restaurateurs of Strasbourg, who do very well out of it, one week out of four. The French spent millions on a brand-new, state-of-the art parliament building.

Foreign dignataries of poor nations headed by petty tyrants could be engouraged to “drop a dime” in Strasborg, between trips to Paris for shopping and entertainment. They won’t be paying their traffic tickets, but they’d be spending. They’d also be within commuting distance of Geneva, where they could visit their fellow countrymen serving at the Human Rights Commission.

Moving the UN to France might be expensive, but it has one great advantage: An operational base in France, from the UN’s point of view, would make all those pesky requests for transparency a lot less pesky.

I for one believe the UN is beyond repair. Just close it up. Commenter Sluggo agrees,

There are useful functions performed by many U.N. agencies, but they tend to go through cycles of corruption and going (to put it mildly) off message (UNICEF). Those functions could be performed even better by independent agencies not swept up by cross-cultural politics or crushed by the petrified bureaucracy. The idea that the U.N. is a first draft of world government and we should be working toward that is an idea whose time will never come. Pull the plug.

But then, Sluggo and I live in NJ, one of the locations considered for temporary commercial leasing during the UN’s NY headquarters renovations. We sure don’t want them here.